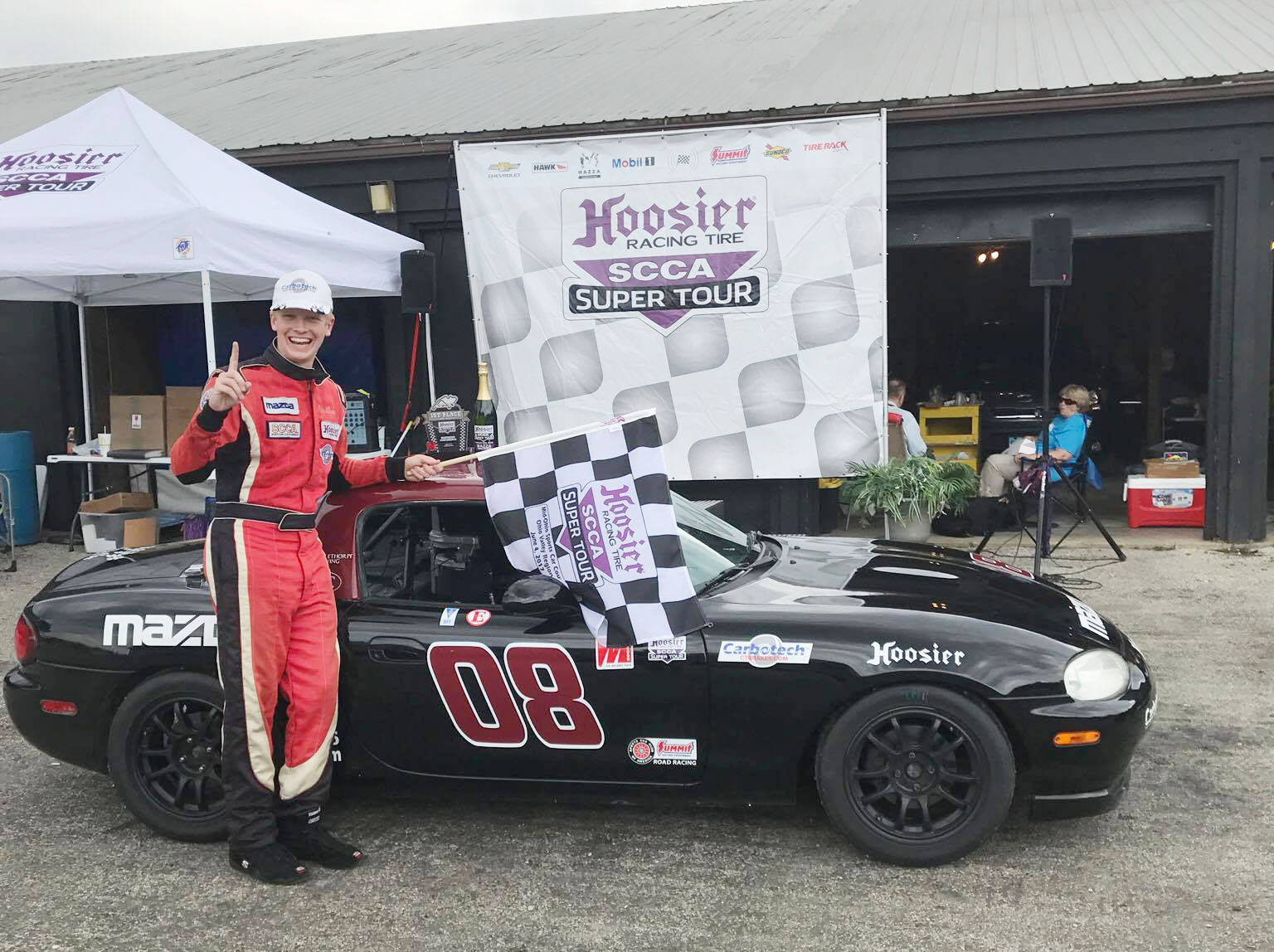 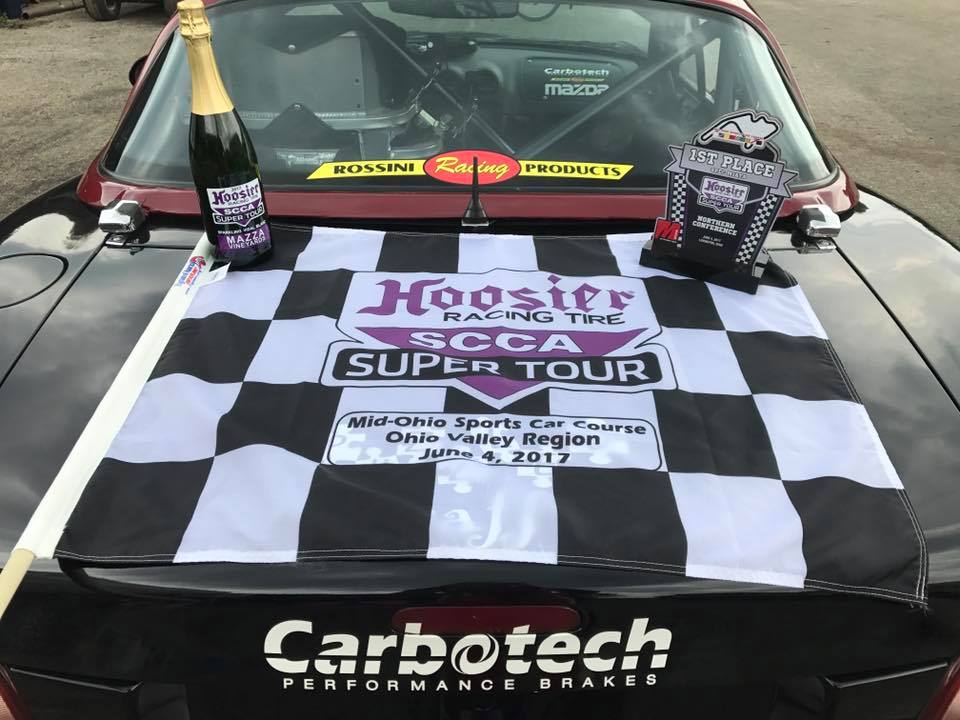 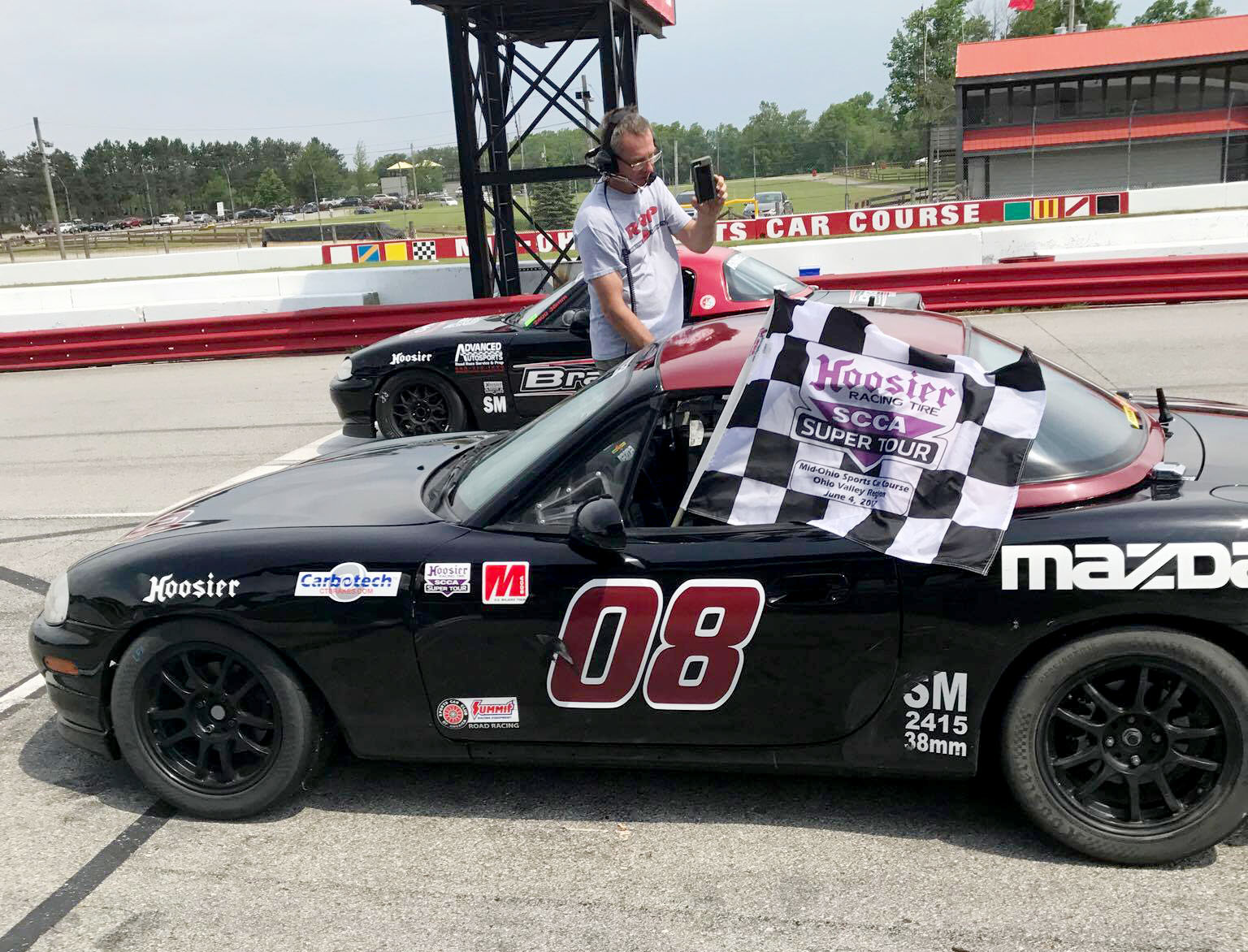 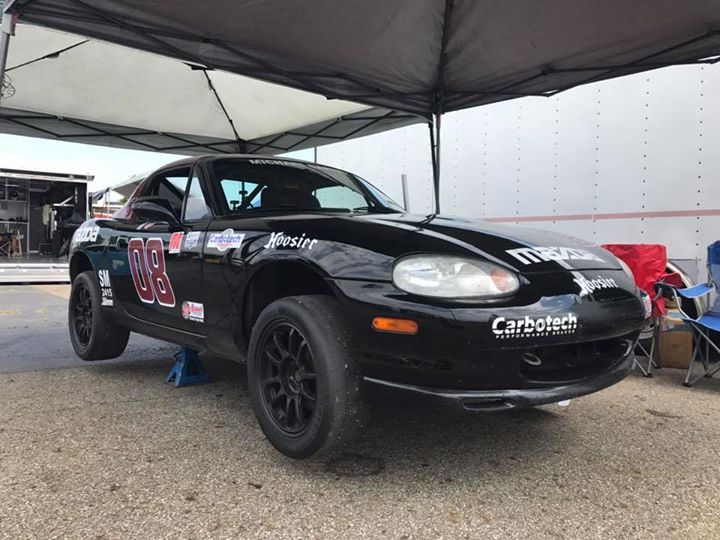 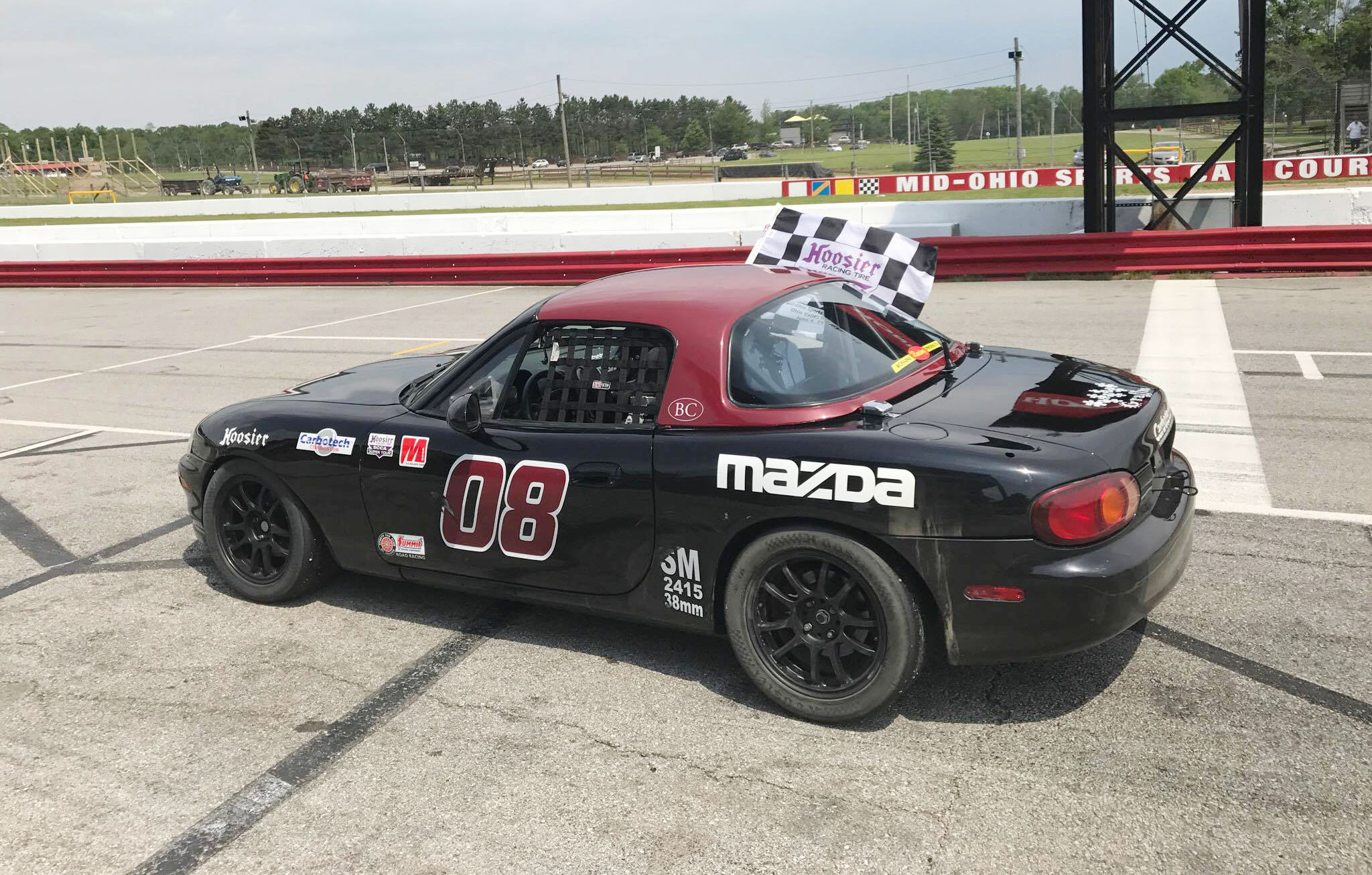 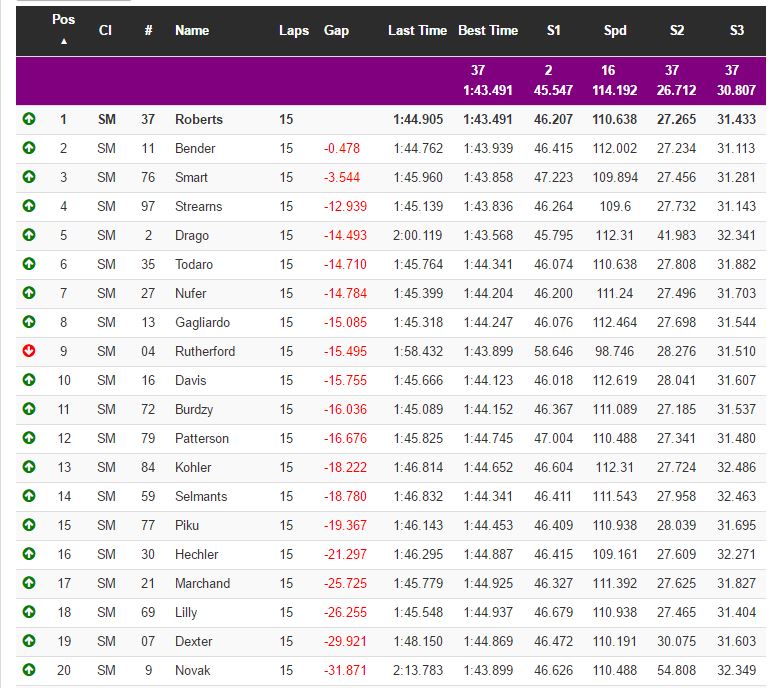 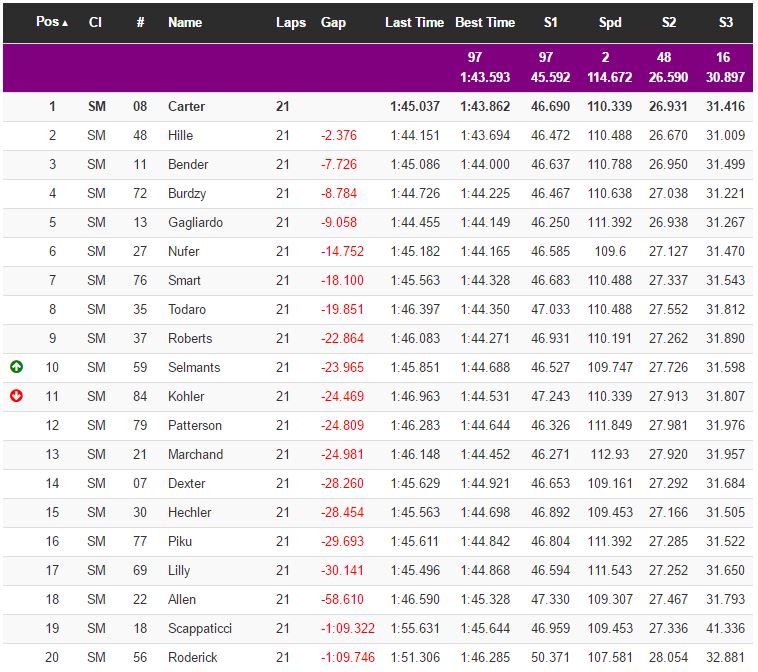 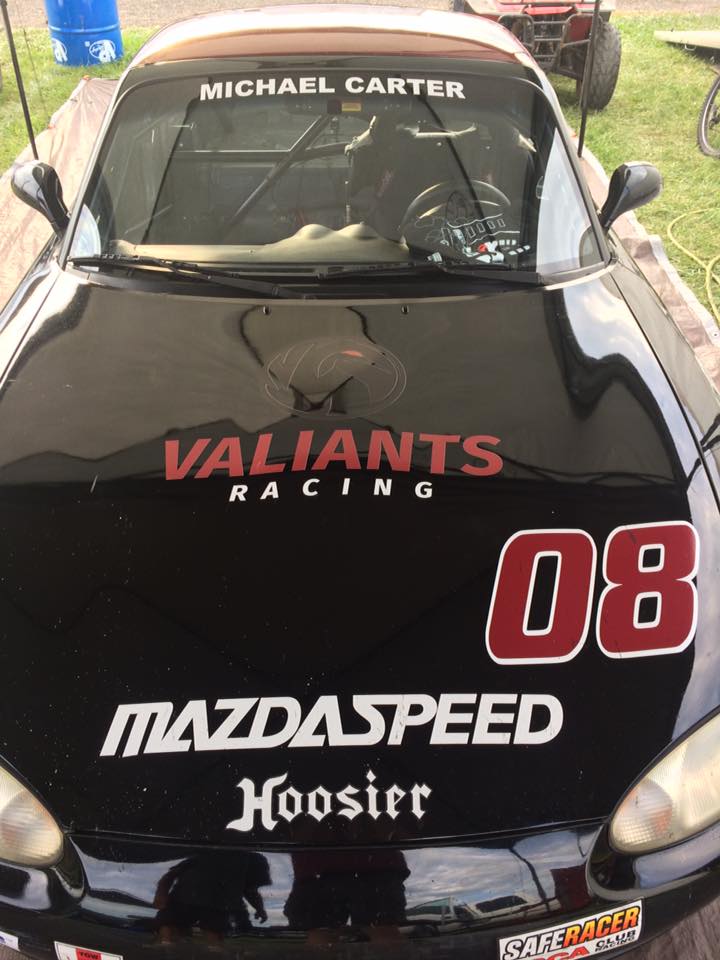 Spec Miata once again proved that it is the premier racing class in the USA with forty-Six cars taking the start at the 2017 Mid-Ohio Majors race. And to further solidify the reputation for amazingly close racing, the top 5 drivers qualified within 1/10th of a second of the pole sitter and the top 17 drivers qualifying within 1 second of the pole sitter. How is that even possible?

In Race 1, Stearns got the early lead but Carter managed to get ahead of Stearns and the two of them started to pull a gap on the field. On Lap four, Jonathan Davis spun in T4 from 3rd place and dropped all the way back to 20th spot. This allowed Jim Drago to move into 3rd place. With three laps to go, Drago closed to the bumper of Carter. The top 6 with three laps to go were less than 2 seconds apart.

With 2 laps to go the top 4 drivers were bumper-to-bumper, Stearns spun out allowing Carter to the lead with Drago, Adam Roberts and Danny Bender in a close race.

On the last lap Carter and Jim Drago touched wheel to wheel, with Carter getting knocked off into China Beach. This allowed Roberts to go through for the win, Bender finished 2nd and Jordan Smart finished 3rd.

In Sundays Race 2 Michael Carter got into an early lead with Stearns on his tail followed by Davis, Hille, Drago and Rutherford. They stayed in formation for about 6 laps when Davis got by Stearns. In the same lap Drago made a move on Hille going into T4 but Hille held him off. After 9 laps less than 1 second separated the top 5 who were all still running bumper to bumper in formation.

At around 11 laps Drago started to lose touch with the top 4 who were still bumper-to-bumper. Carter started to pull away as Hille Stearns and Davis started to get racy with each other, and pulled a 1-1/2 second gap at the end of lap 14. Stearns got ahead of Davis and the side by side racing allowed Drago to close up the gap.

By lap 16 Carter had stretched the lead to over 2 seconds while positions 2 through 5 got into full race mode with lots of side by side racing slowing them down.

Eric Stearns spun off on the exit of Turn 6 taking out Davis with him into the tire wall, allowing Hille into 2nd with Drago into 3rd spot, followed by Danny Bender, Voytek Burdzy and Michael Gagliardo.

Congrats from all of us at Rossini to our drivers Michael Carter, Jonathan Davis, Michael Gagliardo and others