Since he was a kid, Nick Malatesta wanted to go motor racing and he finally took the plunge in 1990 when he started auto-crossing his Camaro. He and his cousin Alex Bolanos were instructing and running TT / HPDE events for NASA and Chin Motorsports and were getting bored without any side-by-side wheel-to-wheel competition and that’s when they heard about Spec Miata. Shortly after they were both deeply immersed in Spec Miata racing

Nick drives the beautiful black, silver and green #56 Rossini powered 1997 Spec Miata. Being a total gearhead, Nick has built and prepped his own cars, everything except the roll cage, which was done by Jeff LaBounty at AutoTechnik.

Nick’s favorite track is Daytona, and while he mainly races in Florida, he has made out of state trips to VIR, Barber Motorsports and Mid Ohio. His goal is to travel around the country and race as many tracks as he can!

Nick’s girlfriend Heidi is his Crew Chief and his biggest fan! His immediate family come out once in a while to watch him race. According to Nick ‘Racing is more than a hobby for me, it’s a lifestyle’. 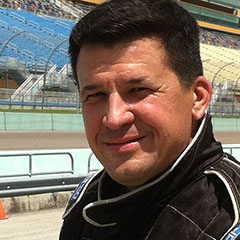 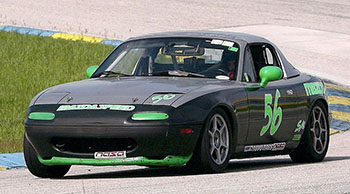