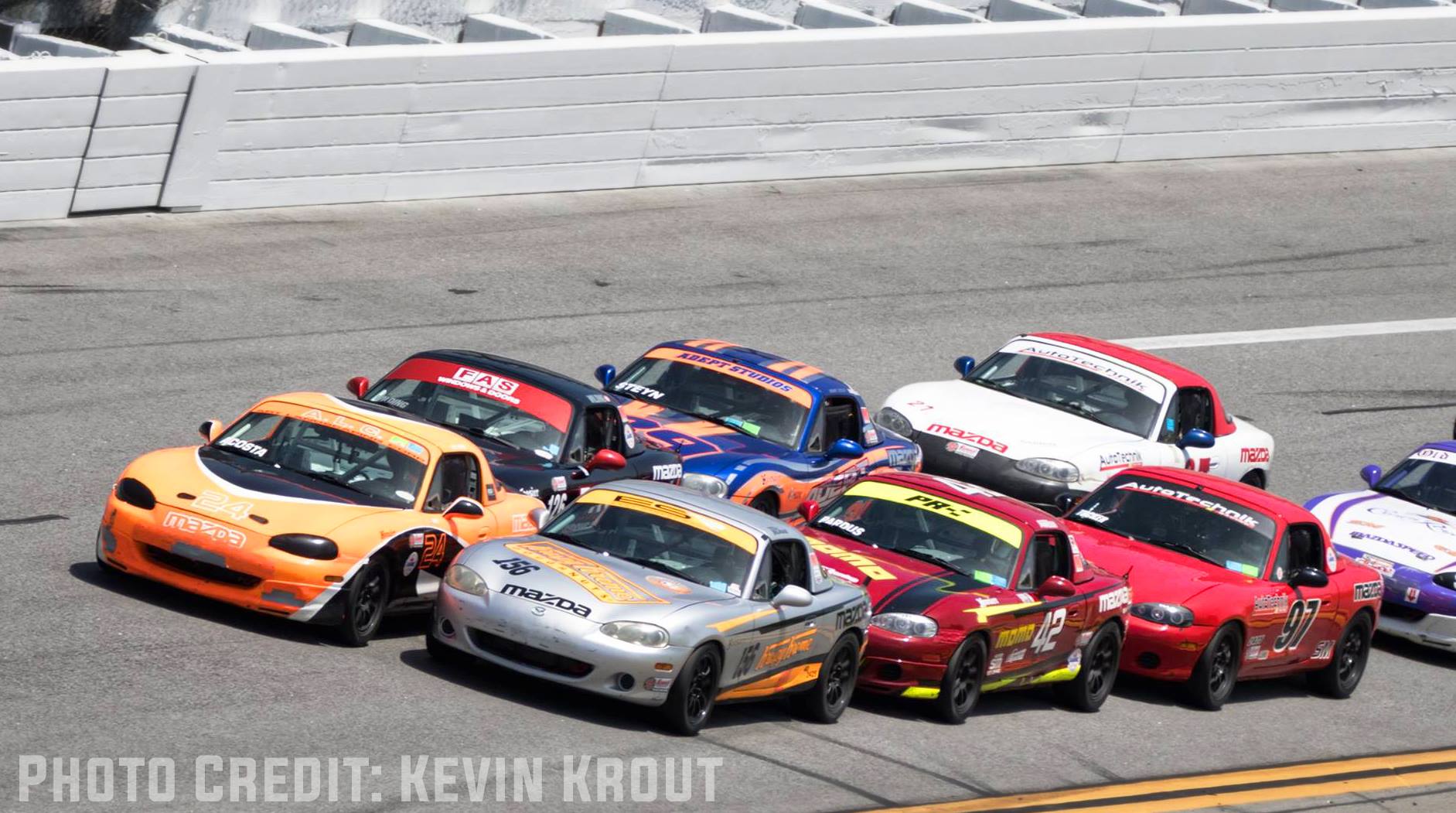 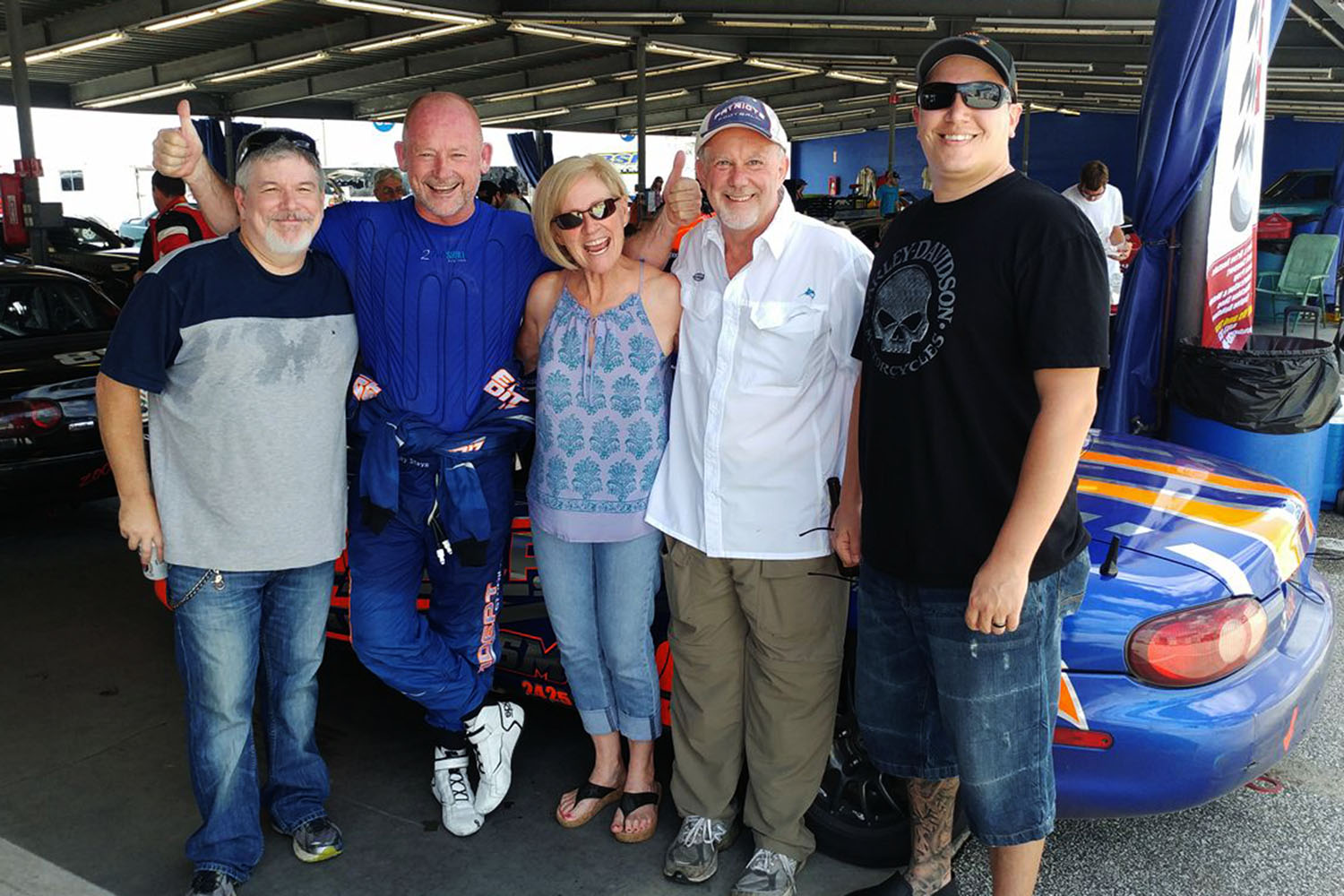 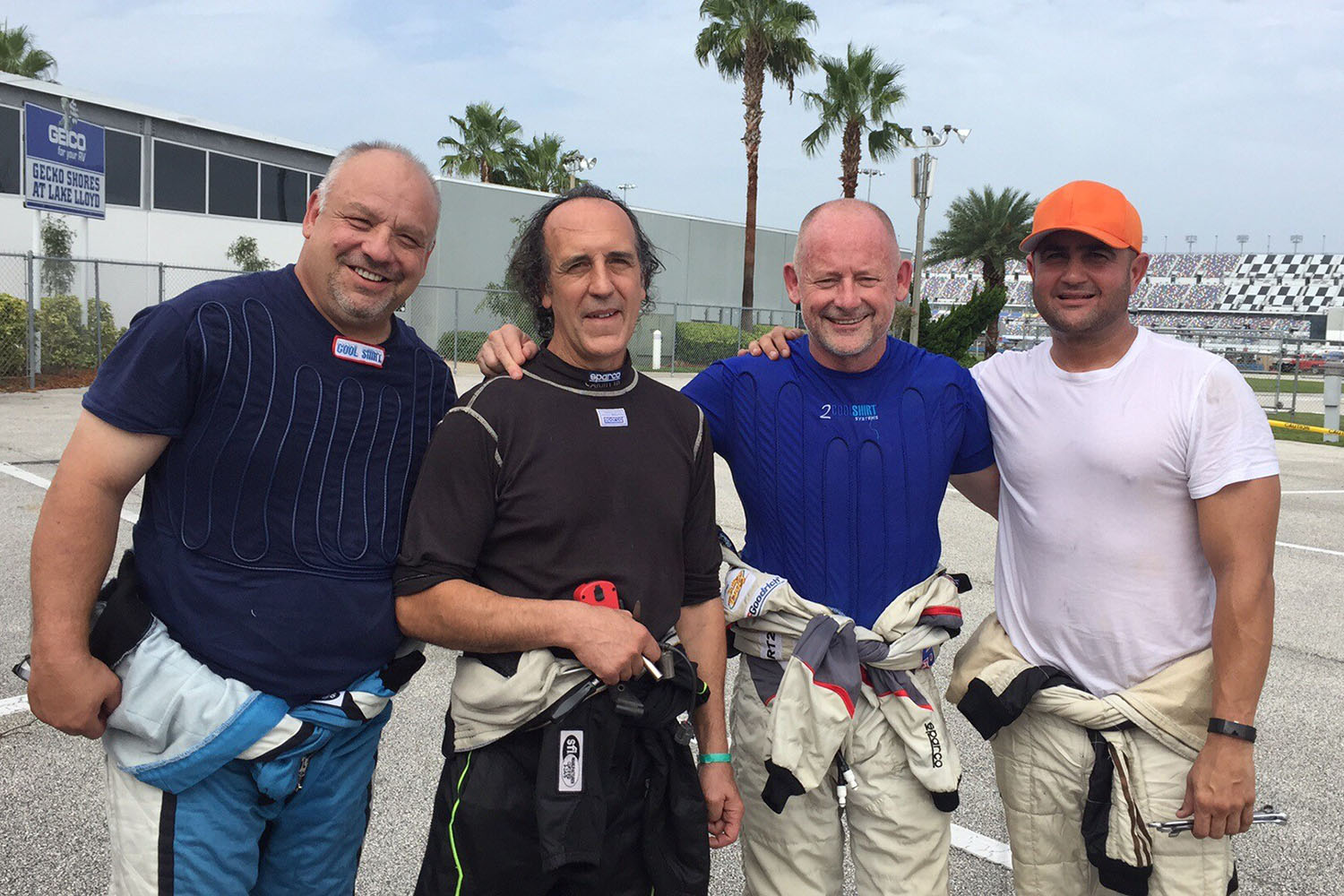 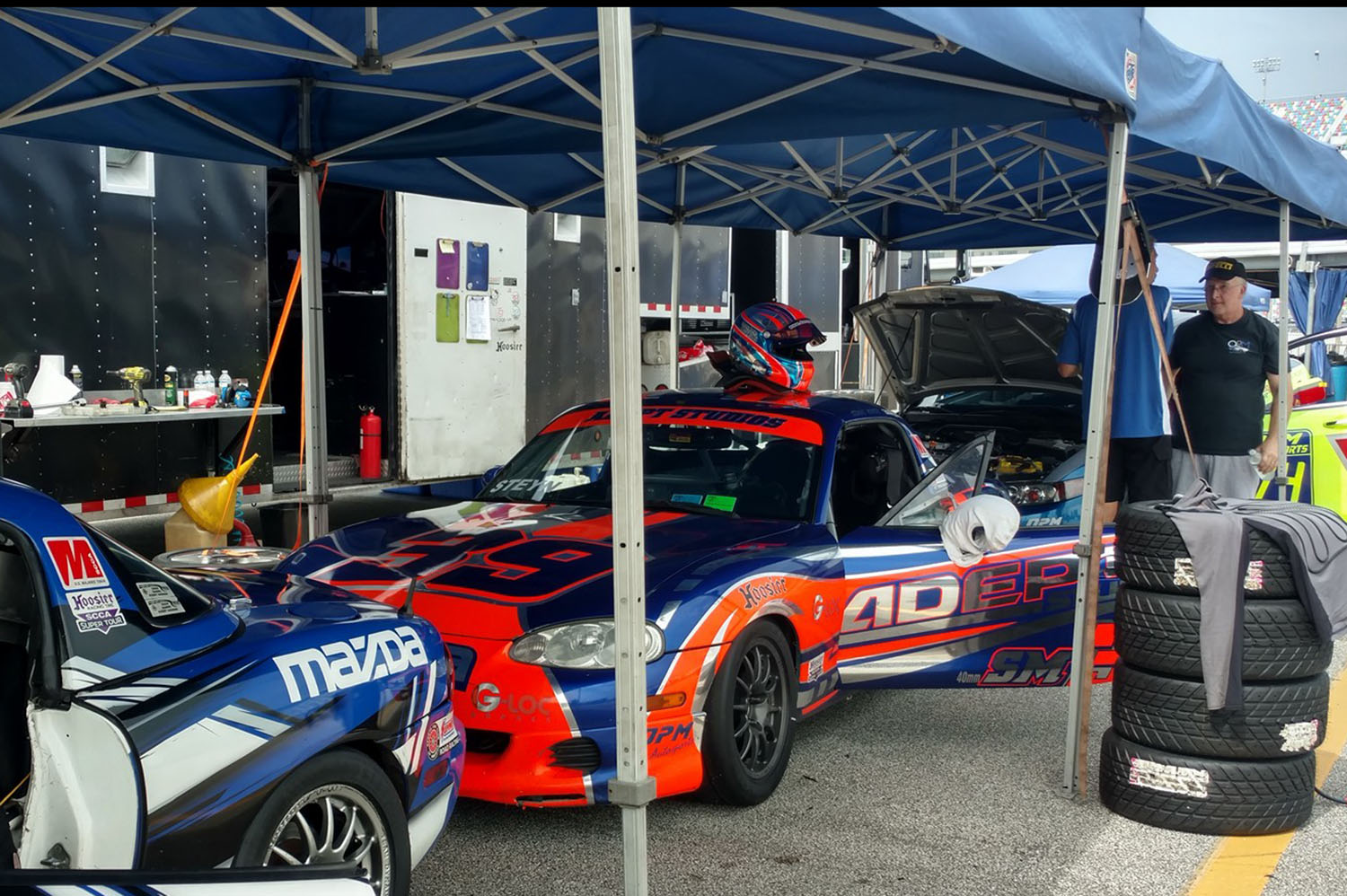 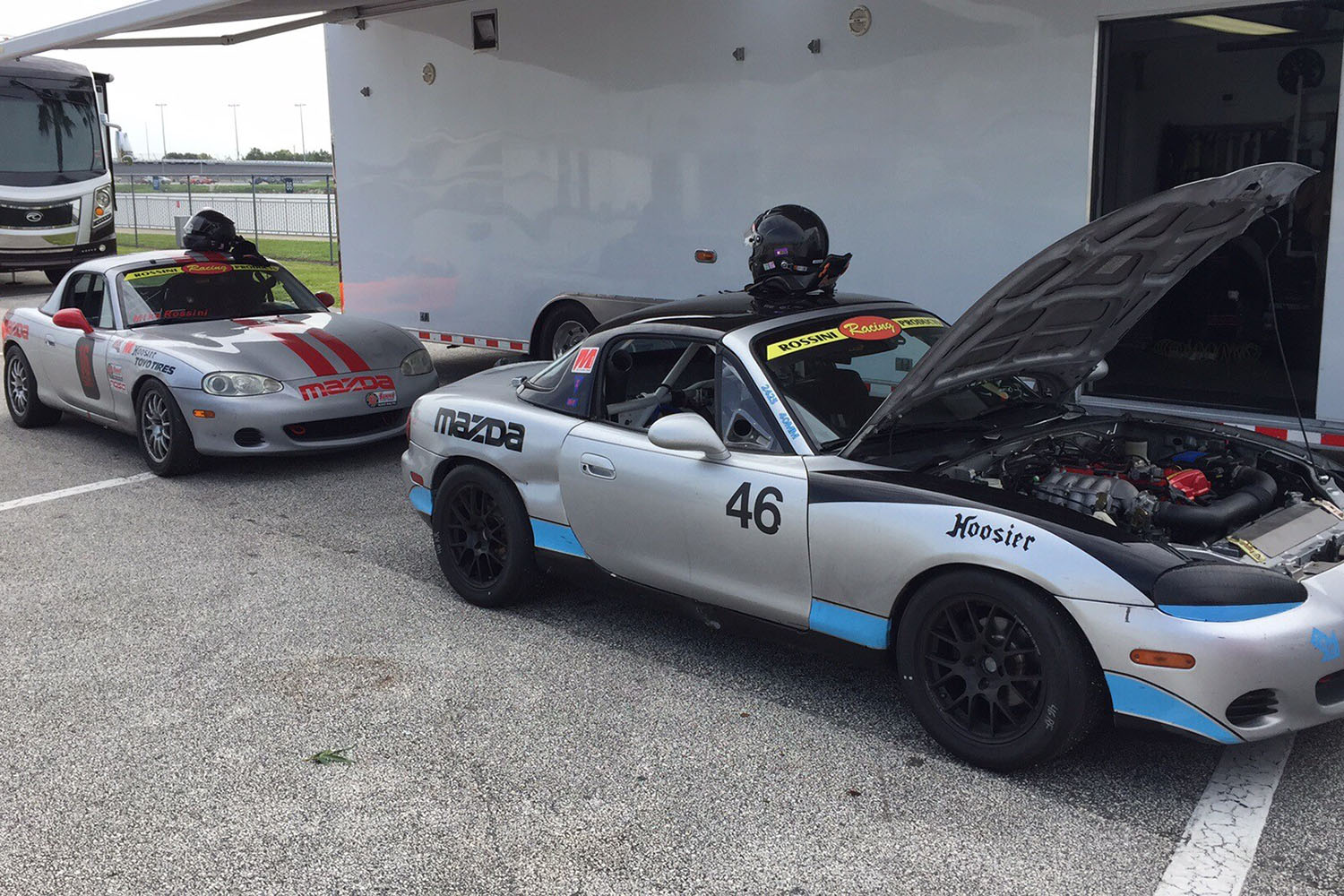 The August Daytona SARRC is always one of the most popular events on the South East Division schedule as the unique nature of Spec Miata racing at Daytona always makes for some really exciting finishes. In the past races have been won by thousandths of a second.

Rossini Racing’s drivers were out in force this weekend with Preston Pardus, Danny Steyn, Papa Rollan, John Wilding, Randy Fusi, Alex Acosta and Mike Rossini himself all in attendance.

In the first qualifying session, Preston Pardus teamed up with Todd Buras and put himself on the pole with Buras in 2nd Trace Hance in 3rd, Alex Acosta in 4th and Danny Steyn in 9th.
Saturday’s SARRC Race 1 was super intense, as rain started to fall on the outlap with the entire field on dry tires. And the rain was only falling on one section of the track. As the green flag waved the rain started to fall harder, so much so that Preston Pardus spun out from the lead in Turn 5, and the run to the bus stop was insane with most drivers sliding sideways through the bus stop.

Steyn managed to move up from 9th to 3rd on the first lap and took the lead shortly thereafter and experimented with different lines trying to find the grip. Todd Buras and Trace Hance stayed in close contention. With two laps to go, Buras got inside Steyn in Turn 5 and going into the last lap it was Buras, Steyn and Hance just adrift of Steyn. They exited the bus stop in the same order but then the famed Daytona draft came into play. Steyn drafted past Buras with a few hundred yards to go, and Hance drafted past Steyn just a few feet from the line, winning by 29 thousandths of a second. Jamie Tucker finished 4th, Andrew Charbonneau 5th, John Wilding 6th, Papa Rollan 7th and Preston Pardus who spun out on the 1st lap drove back to 11th place.

Sunday’s Race 2 was in perfectly dry conditions, but just on the exit of Turn 1 on the first Lap a 3 car incident resulted in carnage and repairs to the ARMCO barriers were needed, resulting in a 10 minute black flag situation. On the restart Alex Acosta started from the lead with Pardus in 2nd Wilding in 3rd and Steyn in 4th. Pardus ran wide at Turn 1, allowing Wilding and Steyn into 1st and 2nd with Tucker in 3rd. Meanwhile Selin Rollan Jnr, who had started from dead last, was pushing anyone he could find to the front and in less than two laps went to the lead, followed by Wilding, Buras and Steyn, with Acosta and Charbonneau in close attendance. Charbonneau and Steyn chased down Buras and Rollan and made the pass going into Turn 1, but Rollan was able to keep the inside line ahead of Charbonneau, and then started to push Steyn away from Charbonneau and Buras.

With one lap to go, Selin was behind Steyn and they had a comfortable lead over Charbonneau going into turn 1 when a full course yellow was displayed and they threw the checker directly afterwards, giving Steyn the win with team mate Rollan in 2nd and Andrew Charbonneau in 3rd. Rossini drivers Wilding finished 7th, Pardus was 8th, and Acosta 10th

Overall a very successful weekend for our team with one pole, one win, two 2nds and one fastest race lap.