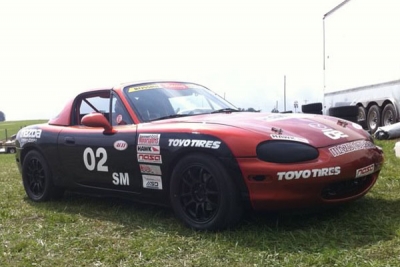 Alex Bolanos and Adam Molaver represented Rossini Racing Engines at the 2011 NASA Championships held at the challenging Mid Ohio track this past weekend.

Unfortunately Alex arrived late for the Thursday Qualifier and was given last place. Adam was consistently in the top 6 drivers most of the weekend leading to Fridays Qualifying Race

Racing in Chip Van Vurst’s ’99, Alex surprised himself and the field in Friday’s Qualifying, laying down the fastest time to edge out Nate Sparks for the pole. Adam Molaver took the bull by the horns and put his ’99 into 9th place.

In Saturdays warm up session, Alex demonstrated his consistency, nailing he pole again. Adam slipped a bit but still pulled down a very respectable 13th place time. Alex’s results moved him up to 6th on the grid for Saturday’s race.

Saturday’s race turned out to be a real challenge. Everyone gridded on the bald Toyos that Mid Ohio likes, but on the out lap the rain started to fall, lightly at first but by mid race it was really coming down. Cars were slipping and sliding around.

Alex took his 6th place start and started cautiously, but was unfortunately knocked off in the Carousel and restarted in 15th place. By the end of the race he had moved back up into 5th place, an amazing achievement, getting by all those cars on a one-line wet track!!!

Adam had a decent start, but lost a few places falling back to 8th, but made it back up to 7th. Unfortunately he was caught out when Charlie Hayes spun in front of him and he had nowhere to go. Alex retired on lap 7. Here is the video of the incident.

Nate Sparks drove a superb race, and despite going into the tire wall, managed to recover and drive his way to the Championship Win.