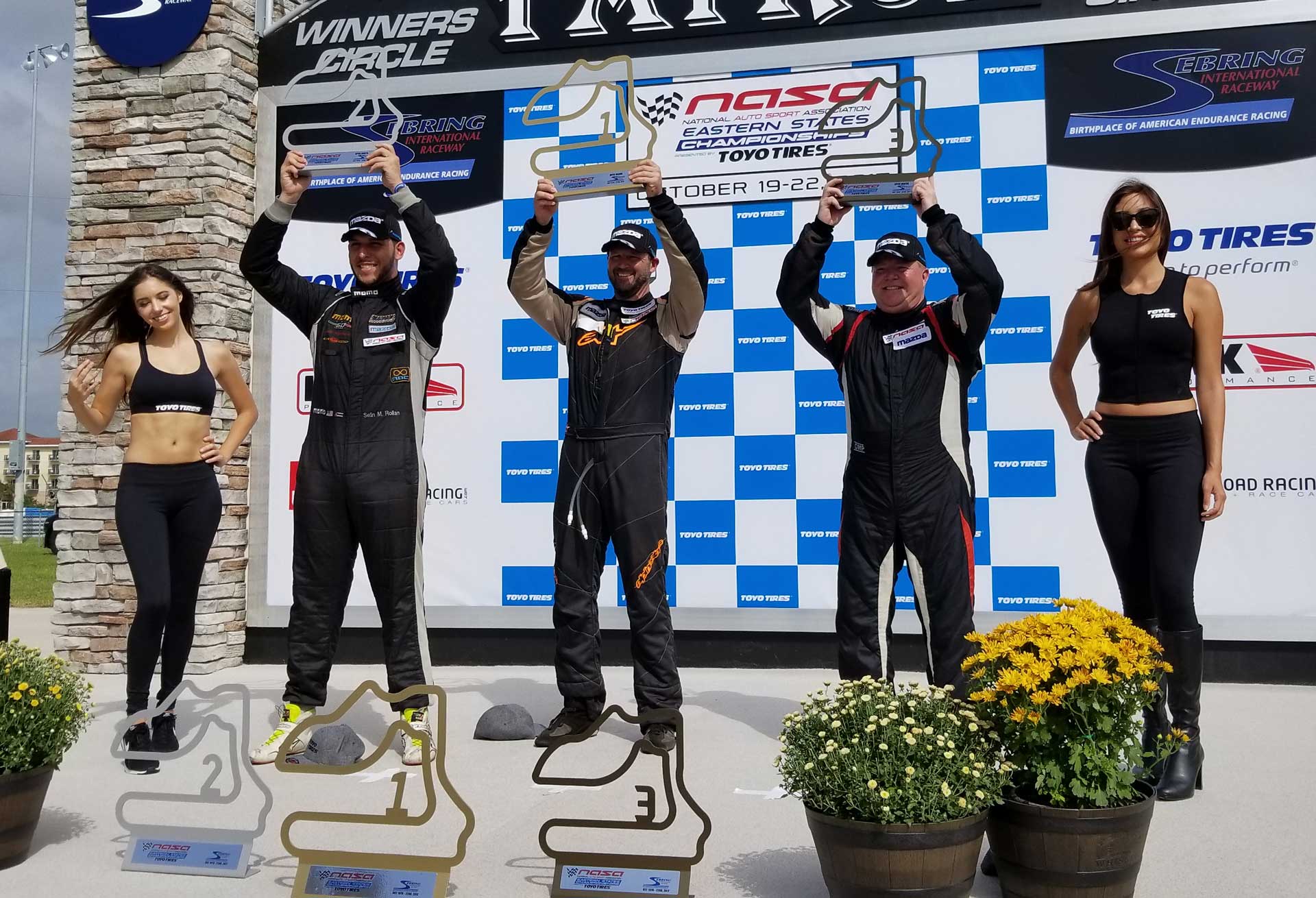 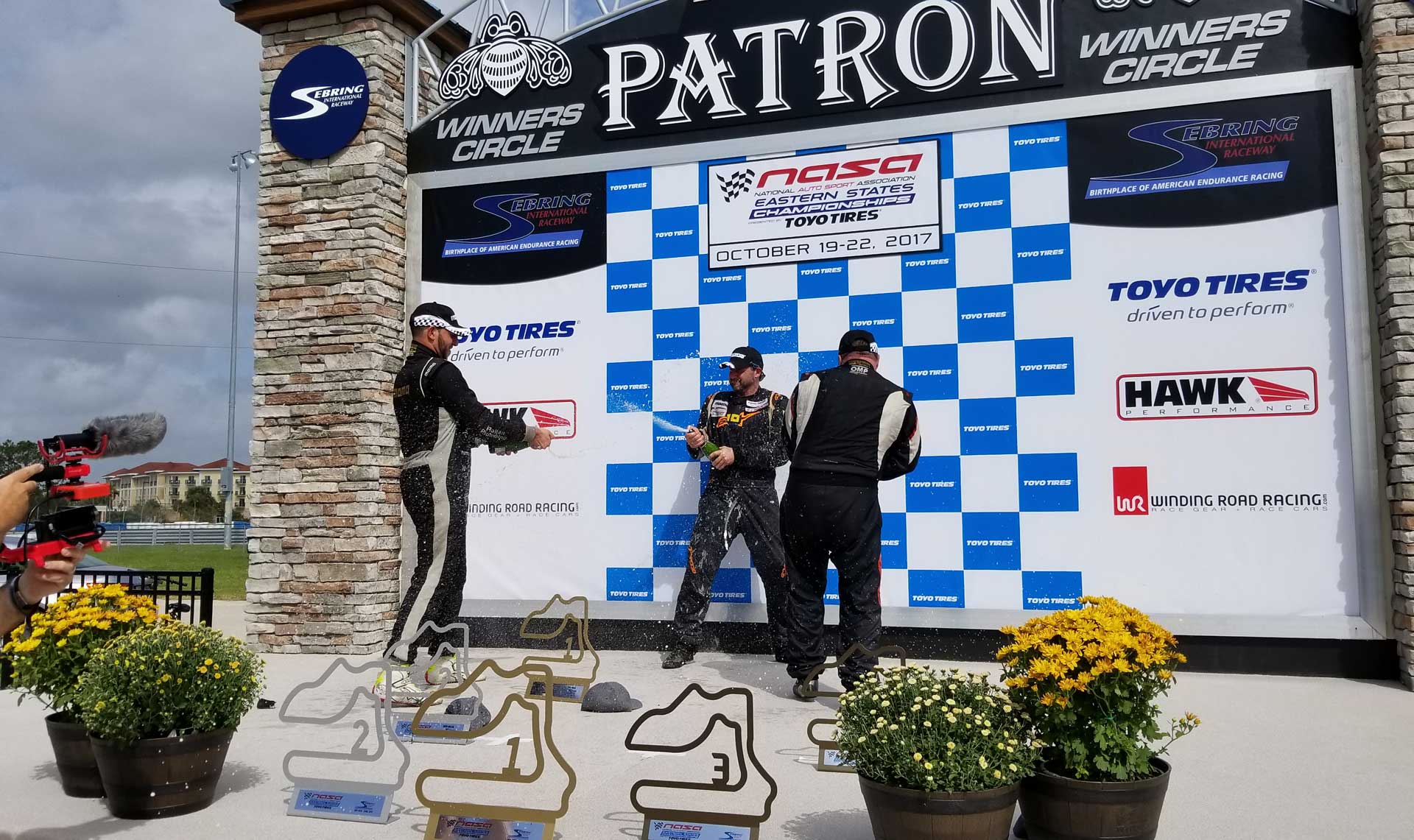 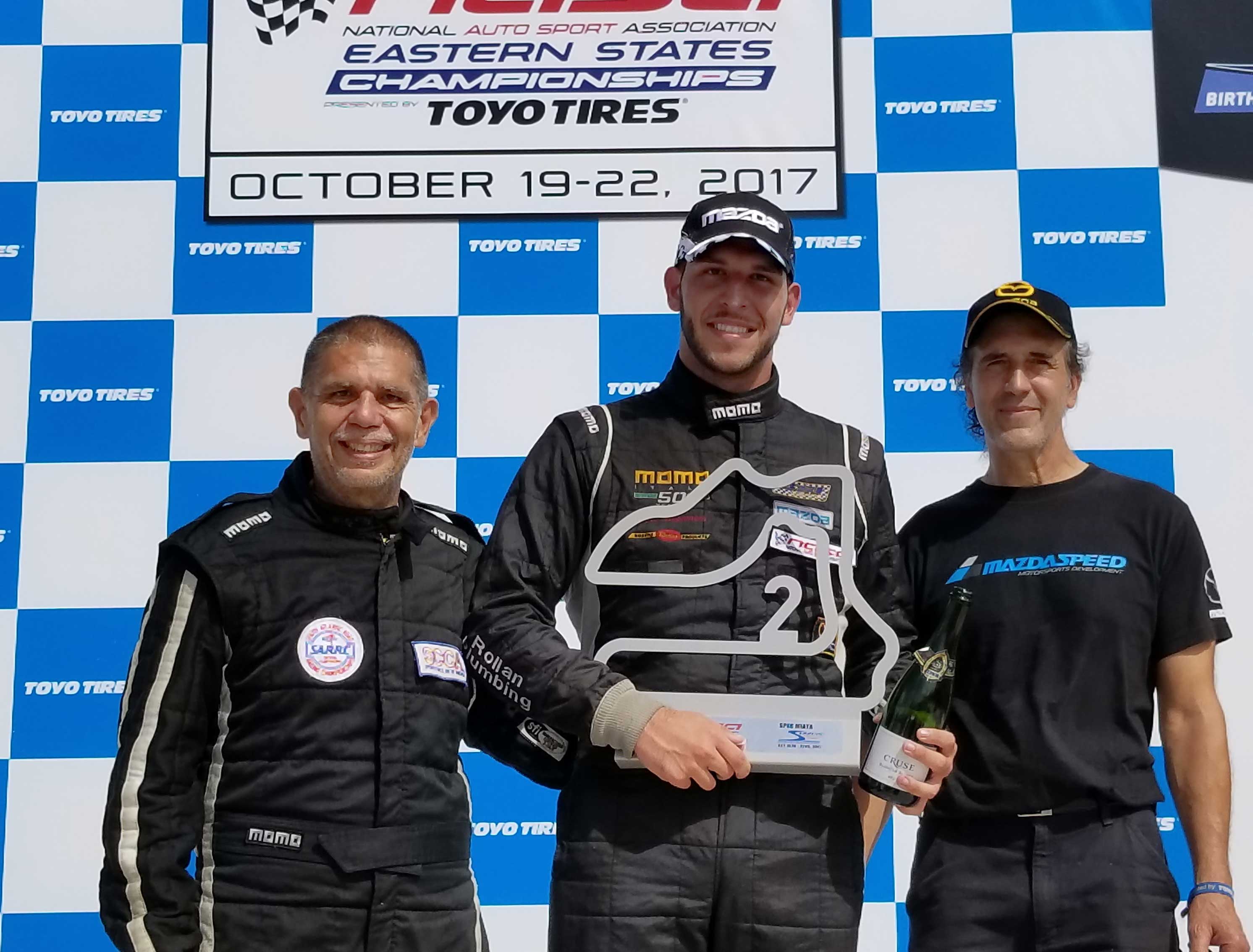 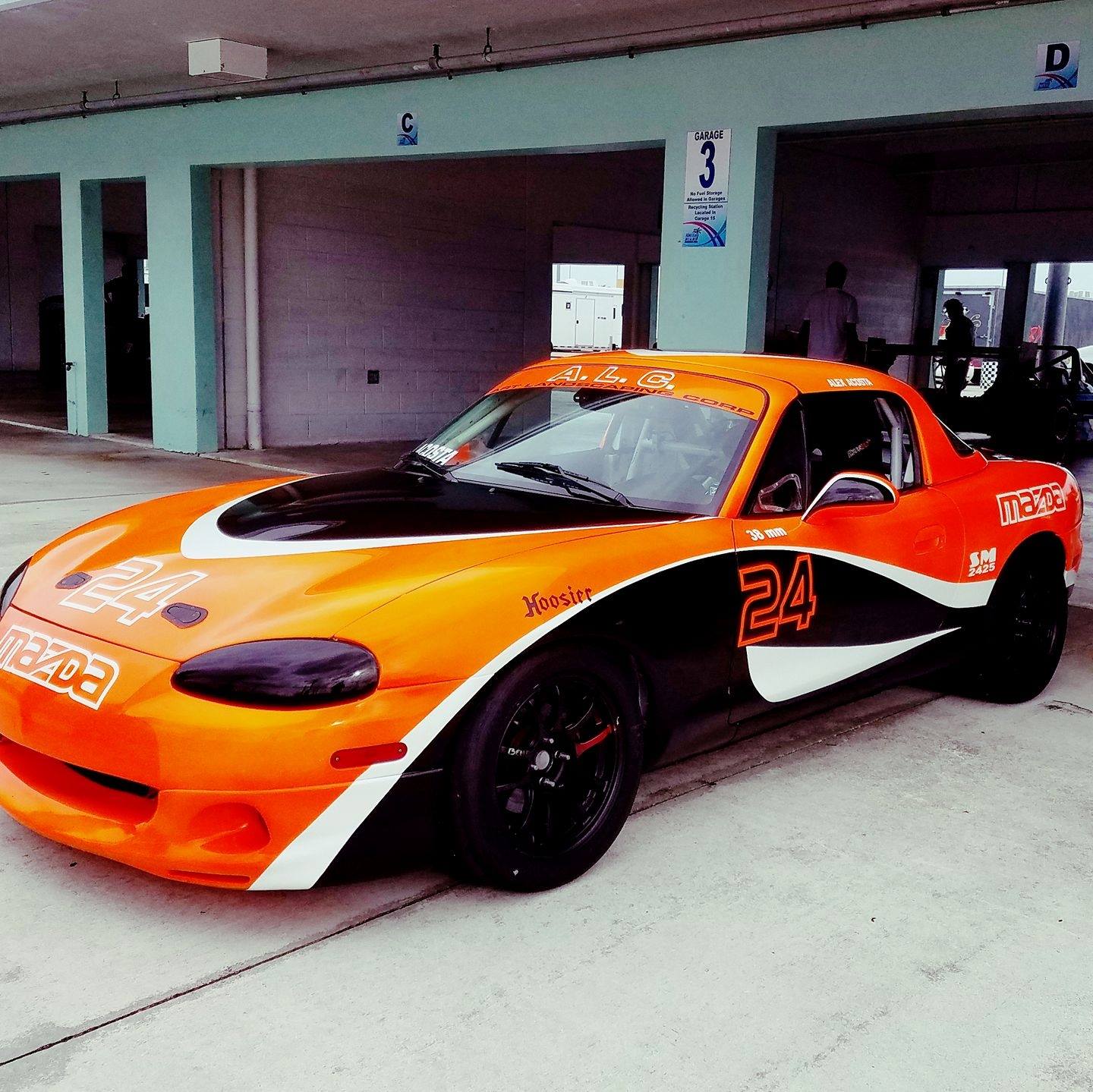 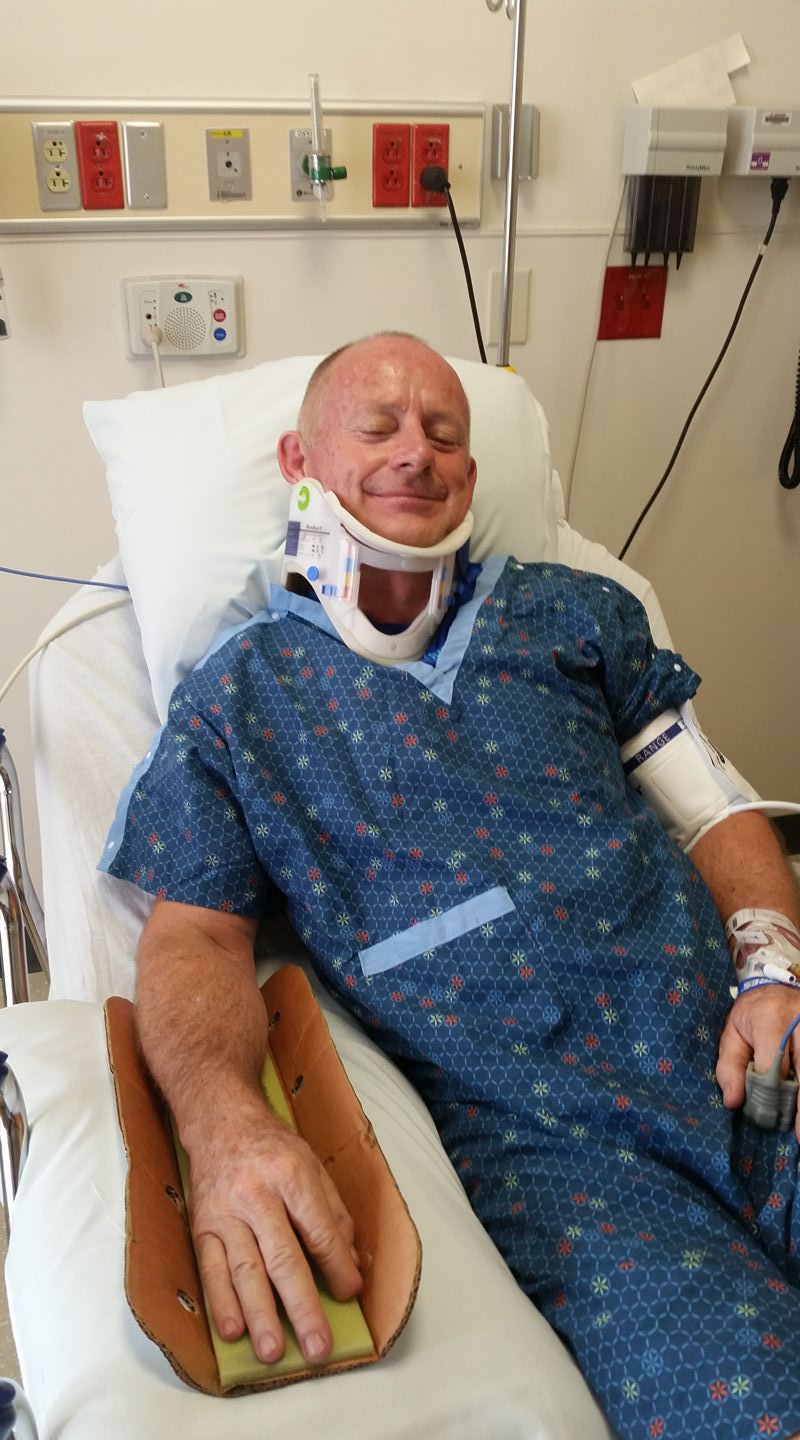 This past weekend saw the running of the 2017 NASA Championships EAST at the famous Sebring International Raceway. This event attracted some of the finest amateur racers in the country, and in the Spec Miata Class, over 30 Spec Miata drivers showed up to compete for the Championship.

During the test days and qualifying, Rossini driver Danny Steyn had been one of the fastest guys on the track, and in Friday’s Qualifying Race he led several laps, eventually finishing 4th behind Jim Drago, Todd Buras and Rossini team mate Selin Rollan. But in Saturday’s 2nd Qualifying Race he was involved in a massive crash at the start, involving many cars, and necessitating a Red Flag situation. Steyn was lifted out his car by the EMT’s and admitted to hospital but was later released after all the X-Rays fortunately turned up negative for fractures. Selin Rollan won the 2nd qualifying race, and with his 3rd place in QR1, he got to start from the pole for Sunday’s main event.

In the Championship Finale on Sunday, Selin got to an early lead when Jim Drago’s transmission quit, and soon he was joined by Texan Michael Ross. Behind them Preston Pardus, Todd Buras, Trevor McCallion and Chris Haldeman were putting on a charge to the front. With one lap to go, Ross took the lead, and despite a well-timed passing attempt by Rollan, he was unable to make it stick and Ross took his inaugural championship over Rollan by 52 thousandths of a second. Trevor McCallion finished 3rd to round out the podium.

We also need to extend a huge shout out to Alex Acosta. He finished 8th in the Sat race and 12th in Sunday’s finale. This was an exceptional showing in a really deep field. Also great to see our Rossini drivers Tyler Quance, Keith Williamson, as well as our NASA Spec Miata organizer, Xavier Calderon duking it out in the field.

The NASA event was well organized, drama was kept to a minimum and the racing was intense. Congrats to all Rossini racers for once again representing our engines so well.

For the past several years, the racing organization NASA, has split their championships into two, into an East and a West Championship. This was done to reduce the amount of travel needed to attend an event that changes its destination tracks every year. However, for 2018 NASA will be hosting their single unified NASA Champs at COTA and this is sure to be an amazing event.