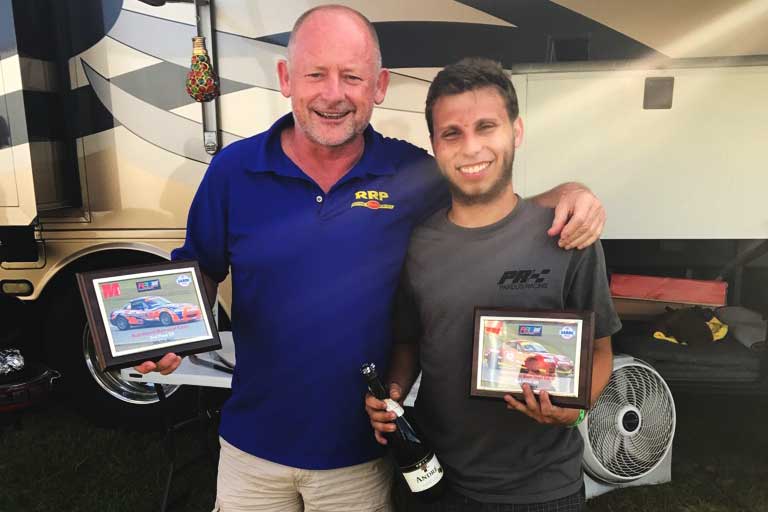 The first of two races in the final 2017 SE Conference Majors at Roebling Road was decided today. Danny Steyn and Selin Rollan started from the front row with fellow Rossini drivers Preston Pardus on the 2nd row and favorite Michael Carter starting from dead last after an error during the morning qualifying session.

Rollan and Steyn got into an immediate lead with Steyn pushing Rollan away from Pardus and Todd Buras. Lap after lap, Steyn and Rollan slowly created a solid lead over 3rd place driver Preston Pardus. As the laps went by, Steyn was all over the tail of Rollan, often looking like he was about to make the pass, but in reality he was just getting fresh air into the radiator to cool his car down for a last lap challenge.

On the last lap Steyn stayed right on the bumper of Rollan, came through the final turn onto the start finish straight and pulled out for the pass. They crossed the line side by side with the win being awarded to Rollan by 54 thousandths of a second. behind them, Preston Pardus was able to defend and crossed the line in third place making it a podium lockout for Rossini racing engines! It was also Prestons first Majors podium and all at Rossini Racing celebrated with him!

Jason Connole had one of his best races ever bringing his Rossini powered car home in 8th place. Brian Wright finished 17th with Jeremy Klein in 22nd.

From the back of fellow Rossini racer field Michael Carter was on a tear. With great precision he picked off all the drivers ahead of him slowly reeling in the front runners. By the end of the race, Carter had moved up from dead last to finish 5th! What an impressive drive.