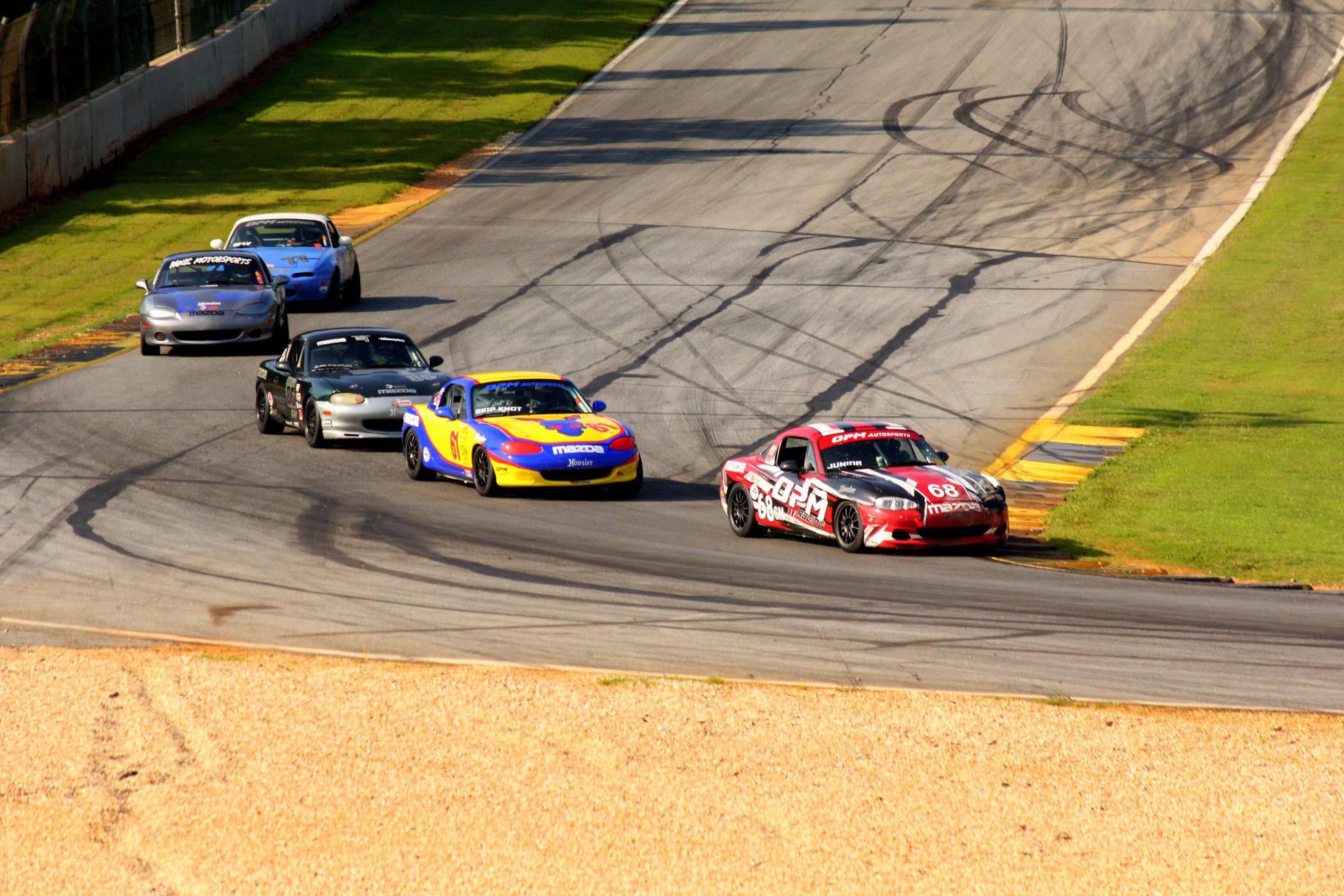 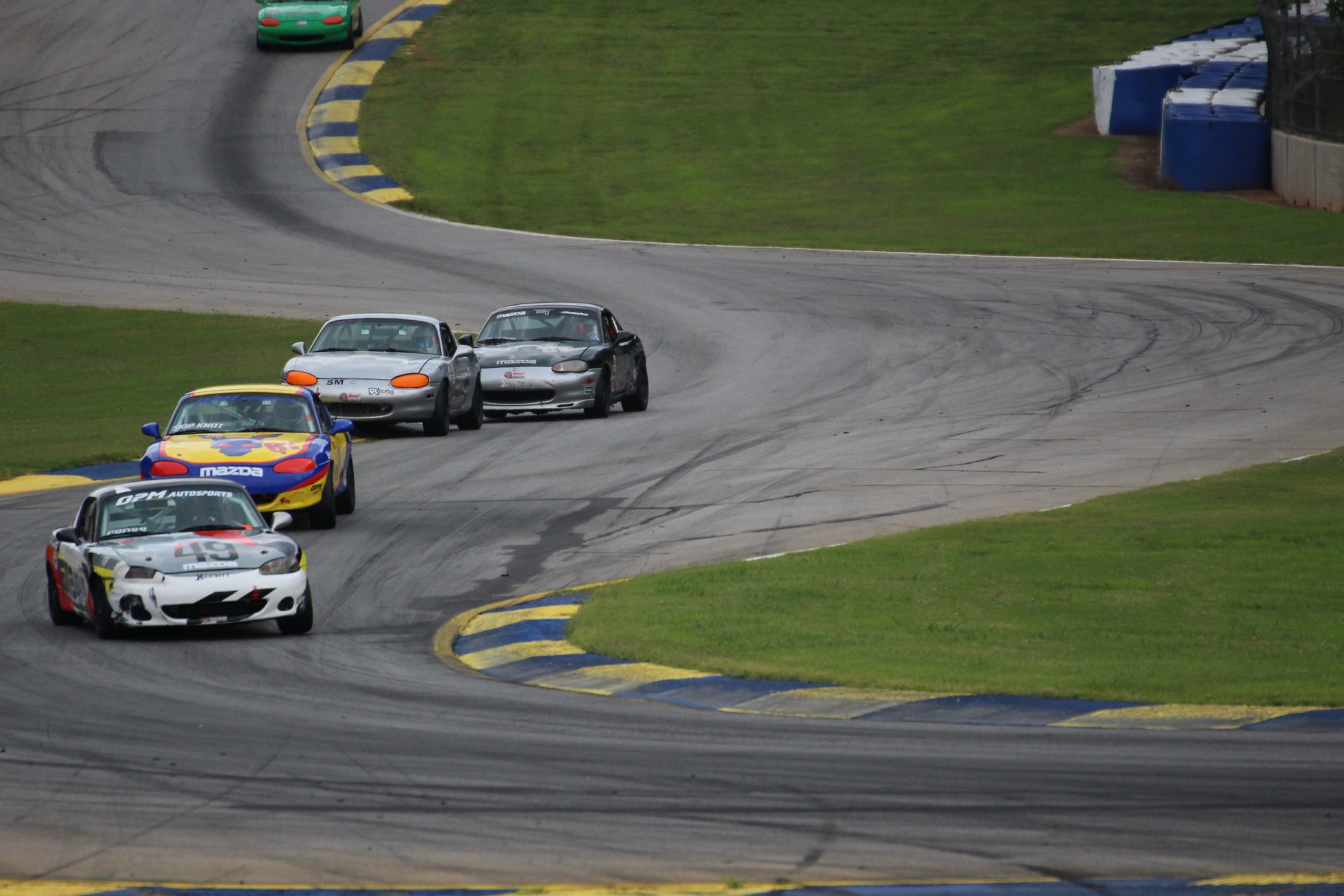 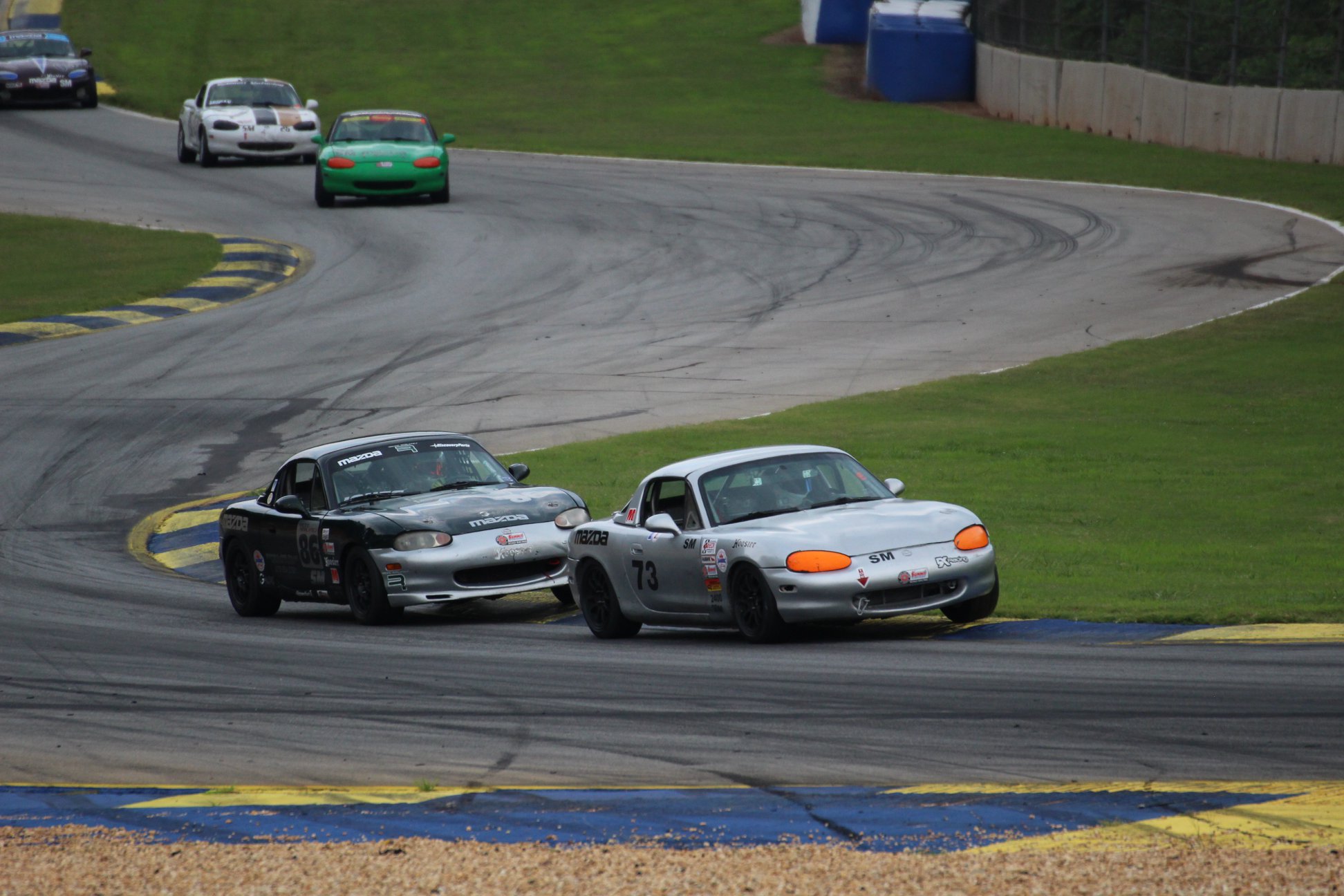 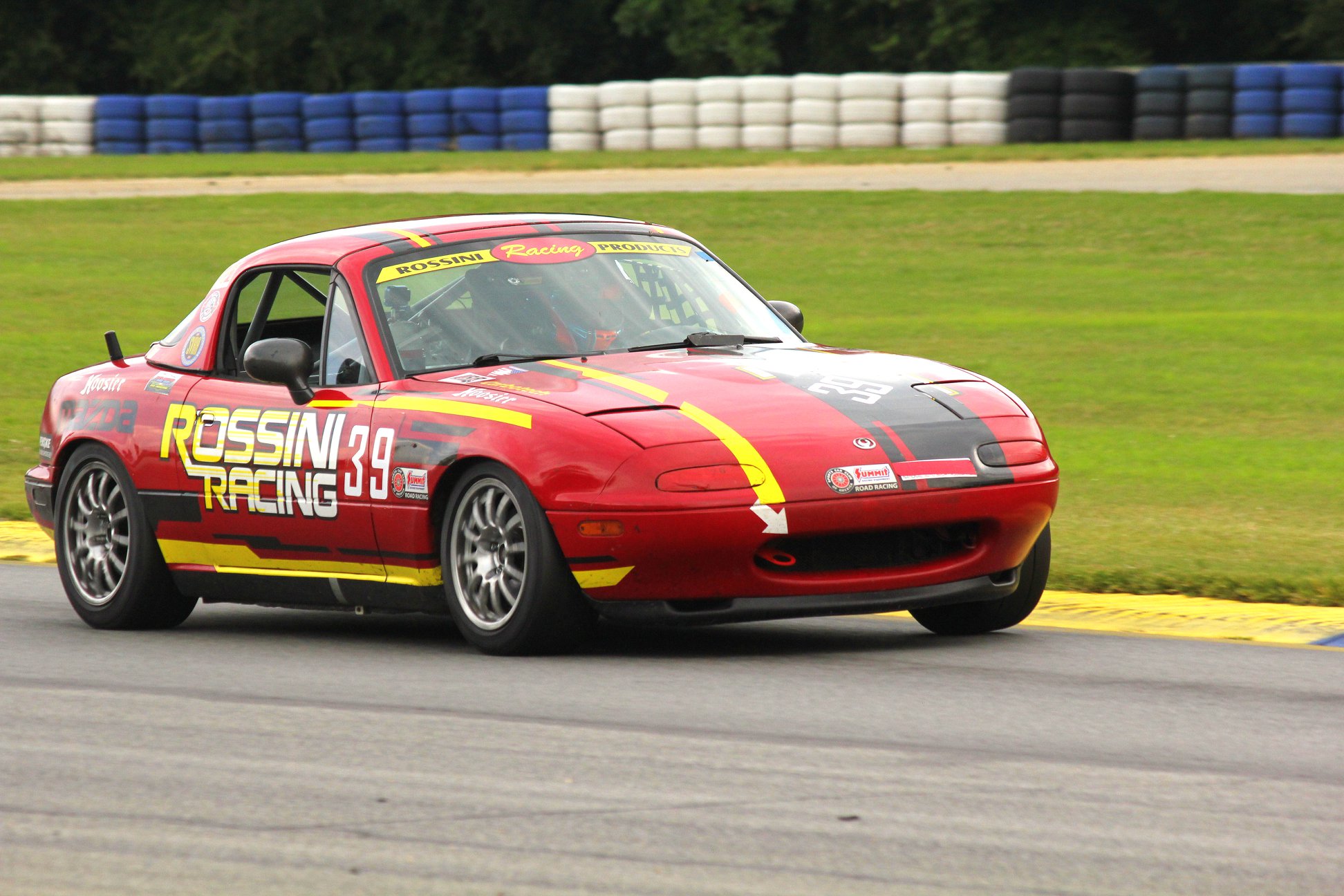 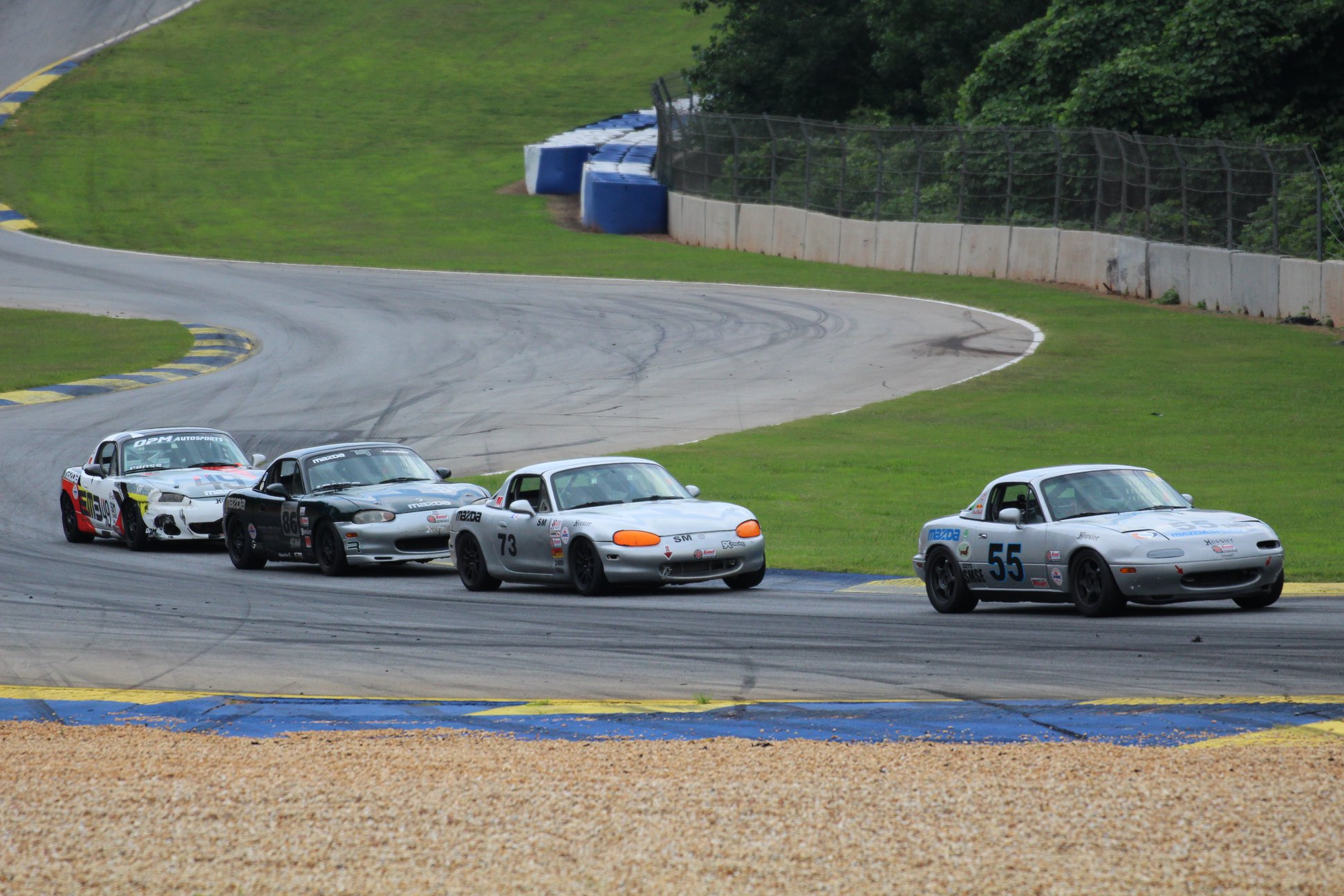 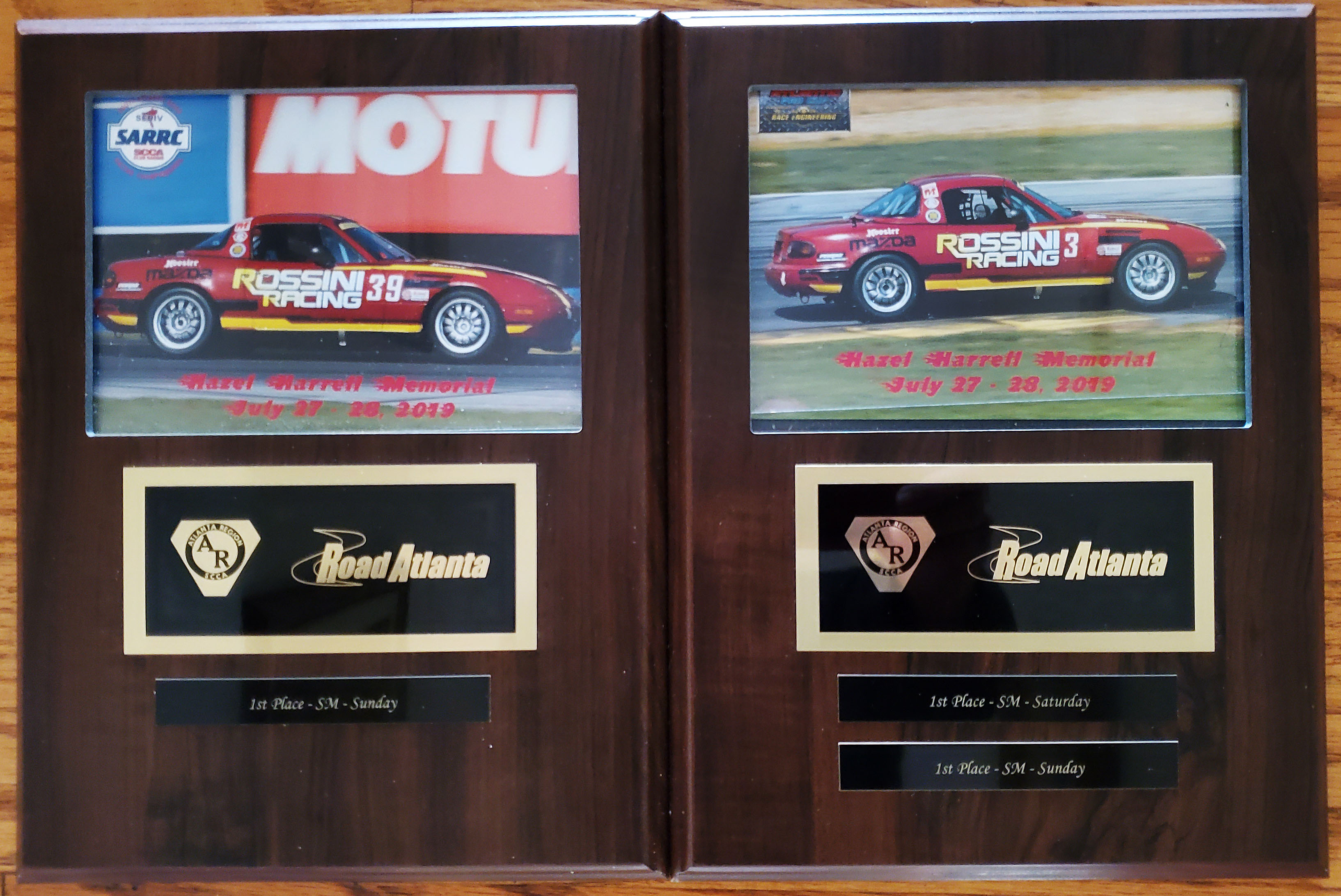 Rossini Racing had several Rossini powered Spec Miatas at Road Atlanta, and while most were having stand out weekends, Danny Steyn was struggling with his ’99 that he has brought out in a few sessions this year. Ultimately he gave up on it, and decided to drive our 1994 NA 1.8.

It obviously fit him well as he was able to run 7 consecutive laps within 3 tenths of a second in the only Qualifying session, first time in the car, putting it on the pole. Chuck MacTutus was 2nd, Kevin Beaver in another NA 1.8 was 3rd, and Jarrett Jones in 4th.

In race 1, Steyn messed up the start and found himself in 5th place, chasing MacTutus, Jones, Alan Cross and Kevin Beaver, with Skip Brock Junior on his tail.

Unfortunately on Lap 3, Brock Jr put it in the wall at T5 and for some reason, they did not throw the FCY or black flag, which was warranted due to his car being almost on the racing line. And sure enough, just one lap later, Kevin Beaver lost it in T5 and slammed straight into Jnr’s car.

Up front Chuck was putting on a clinic extending his lead and finished ahead of Jarrett when the checkered was thrown early to recover the damaged cars. Alan Cross finished 3rd with Steyn in 4th.

In Saturdays APCS, Steyn drove away to an easy win in Spec Miata when Chuck made a tactical error, doing his pit stop too early and rejoining in the middle of slower traffic

Sunday’s APCS Race 2 looked to be closer, but Chuck unfortunately retired with rear differential issues. Steyn had another easy win in Spec Miata.

Sunday’s SARRC Race 2 was held in the mid afternoon heat where tire management always plays a role at Road Atlanta. Starting from pole based on the finishing order from Race 1, Chuck got off to an early lead with Cross in 2nd and Steyn in 3rd. On lap 2, Steyn got passed Cross and set off making up the 1-1/2 second deficit that Chuck had opened up in the first two laps.

Steyn hit his marks cleanly for the next 3 laps but by conserving his tires, he made was making no headway. But then from lap 6 onwards, Chuck started to struggle getting off the corners as his tires started to overheat, and Steyn started to close the gap. A lap later they went through T10A/10B side by side, and another lap later went through Turn 1 side by side, with Steyn eventually taking the lead on lap 8. Steyn was exiting cleanly but was losing time in T10A/10B allowing Chuck to stay close, but in the end Steyn had the win over Chuck when the checker was unfortunately waved two laps early. Skip Brock had a great race finishing in 3rd