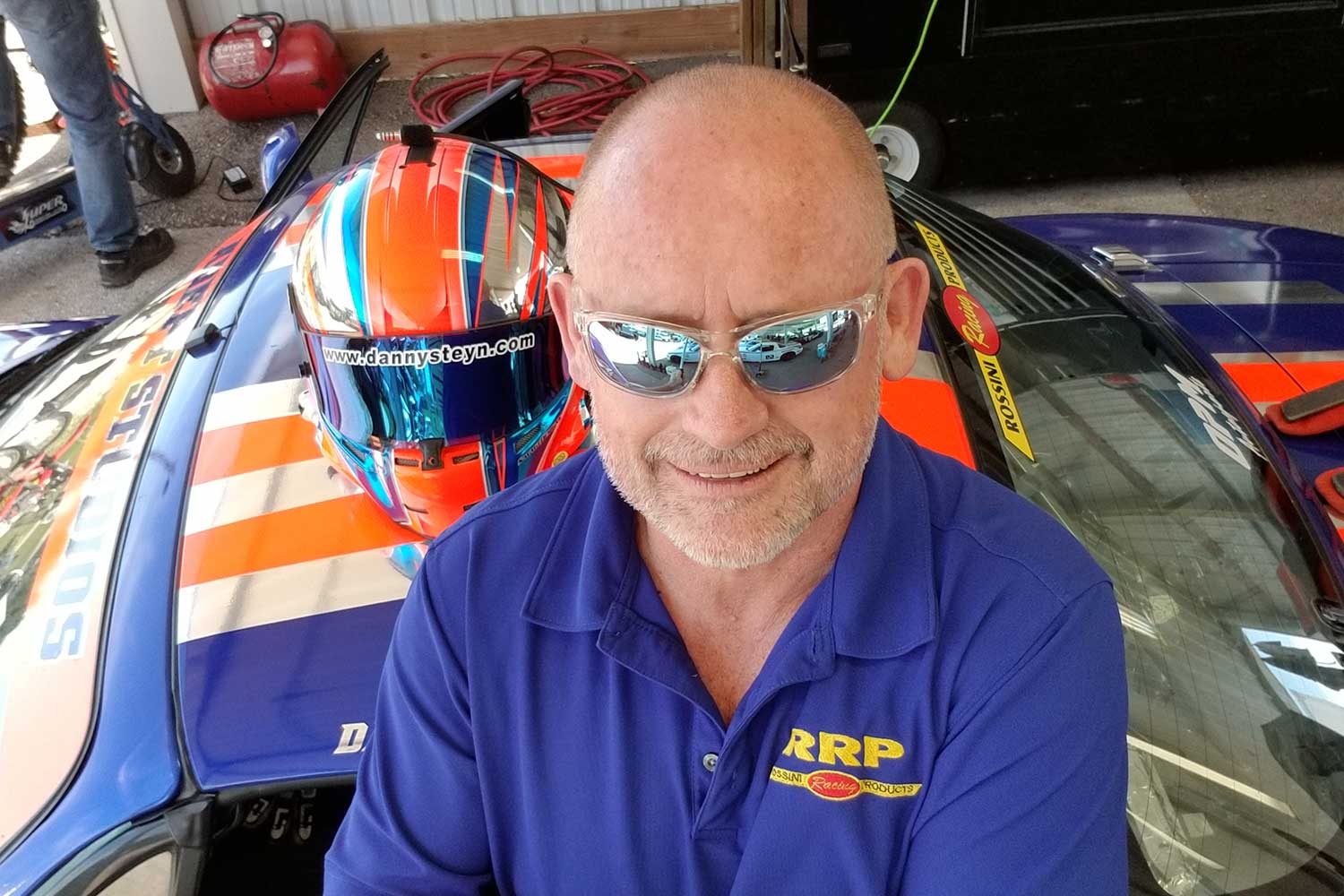 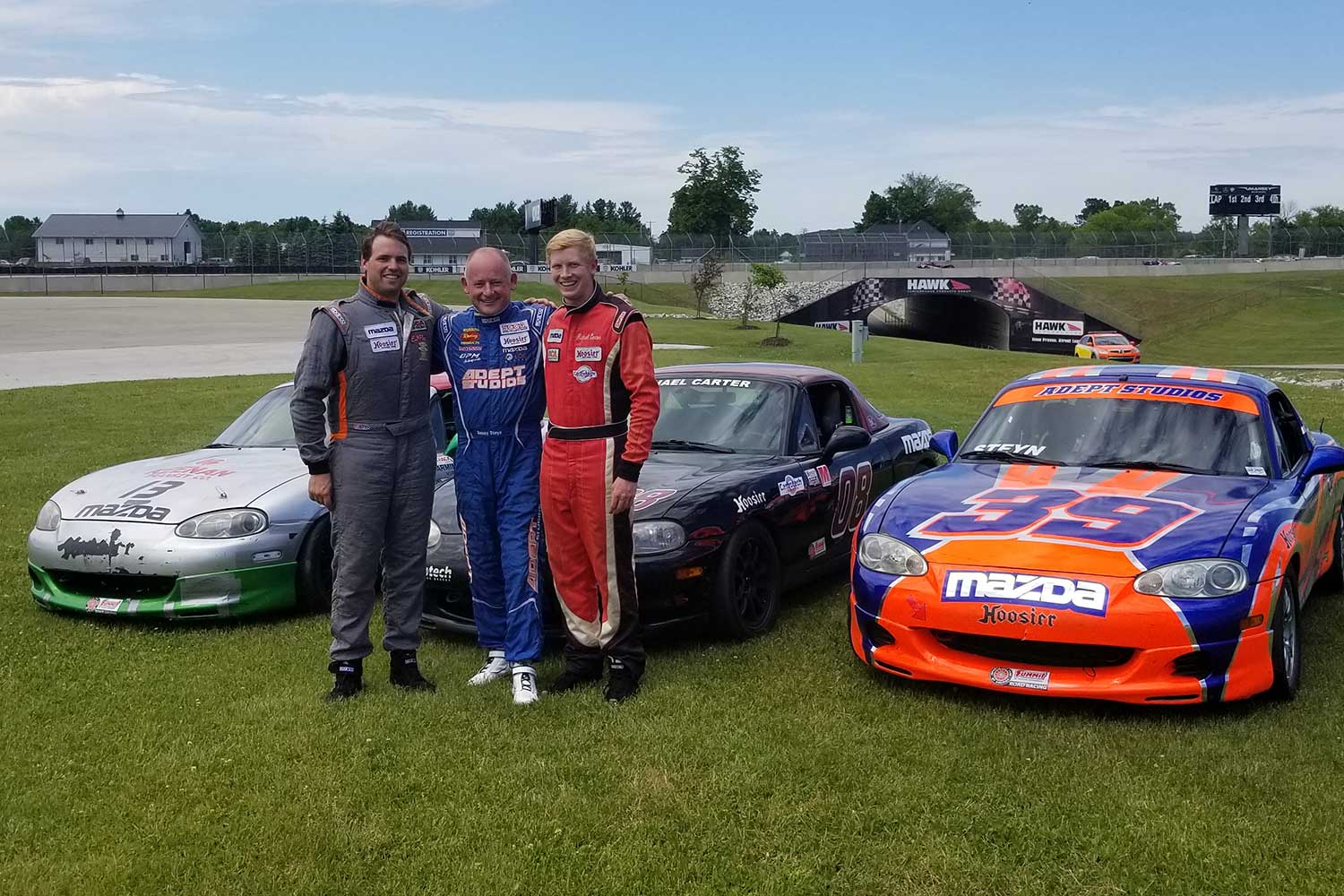 Michael Carter, Jonathan Davis, Danny Steyn, Marco Gallaher and Michael Gagliardo were the five Rossini powered drivers that made the journey to the famed Road America race track in Elkhart Lake Wisconsin for the running of the 62nd annual June Sprints. This event is one of the biggest shows in the SCCA calendar, ranking second only to the Runoffs, and this year was no exception. The top drivers in the country were on hand to race for the title, and in the Spec Miata class, more than 60 drivers were entered.

In Qualifying Session 1, Steyn, Carter and Gagliardo worked together in perfect synchronicity, and finished the session with a perfect lockout of the front three starting positions. Gallaher and Davis held down 13th and 14th spots respectively.

However the 2nd Qualifying Session was in colder weather and the Rossini trio were unable to repeat their earlier teamwork, and were relegated to 7th, 8th and 12th place respectively.

In Saturday’s Race 1, a Turn 1 incident immediately split the field and by Lap 2, Steyn found himself on the bumper of the front runners Jim Drago and Chris Haldeman, with the rest of the field way behind. Drago was pushing Haldeman, and Steyn was doing everything he could to stay in their draft but was burning off his tires in the process, but trying to make up all the distance lost in the straights in the braking zones and corners. Steyn eventually lost contact with the leaders, falling into the clutches of the chasing group behind, that included Craig Berry, Danny Bender, Michael Carter, Todd Buras, Jason Knuteson and Tom Brown.

With two laps to go, Haldeman and Drago started fighting for position and the group of six started to close. With yellow flags out in T12 and T14, Drago held off Haldeman, with Berry getting the final podium spot. Carter eventually finished 5th with Steyn 6th, Davis 11th, and Gallaher in 16th. Gagliardo unfortunately had to retire after contact messed up his wheel alignment.

Sunday’s Race 2, the feature race for the June Sprints title and sash, was always going to be a long drawn out fight. Unlike Race 1 where two cars made a breakaway, the front group exchanged the lead almost every lap, and were unable to break contact with the train following behind. Michael Carter, Jim Drago, Voytek Burdzy, Danny Bender all took turns leading the race. Steyn meanwhile had dropped all the way back to 11th place, completely out of contention, and then waited on Michael Ross, so that the two of them could work together and charge their way to the front.

With a few laps to go, Carter got hip checked out into the grass at T14, Berry’s car suffered differential failure and the race was on at the front. Drago, Haldeman, Buras, Bender, Burdzy, it was anyone’s race to win. With two turns to go Steyn eventually caught up to the lew-lead pack, managed to get inside Buras and push Haldeman into 4th place, finishing 5th himself. Up front the finishing order was Bender, Burdzy, Drago, Haldeman, Steyn, Buras, Knuteson and Ross.