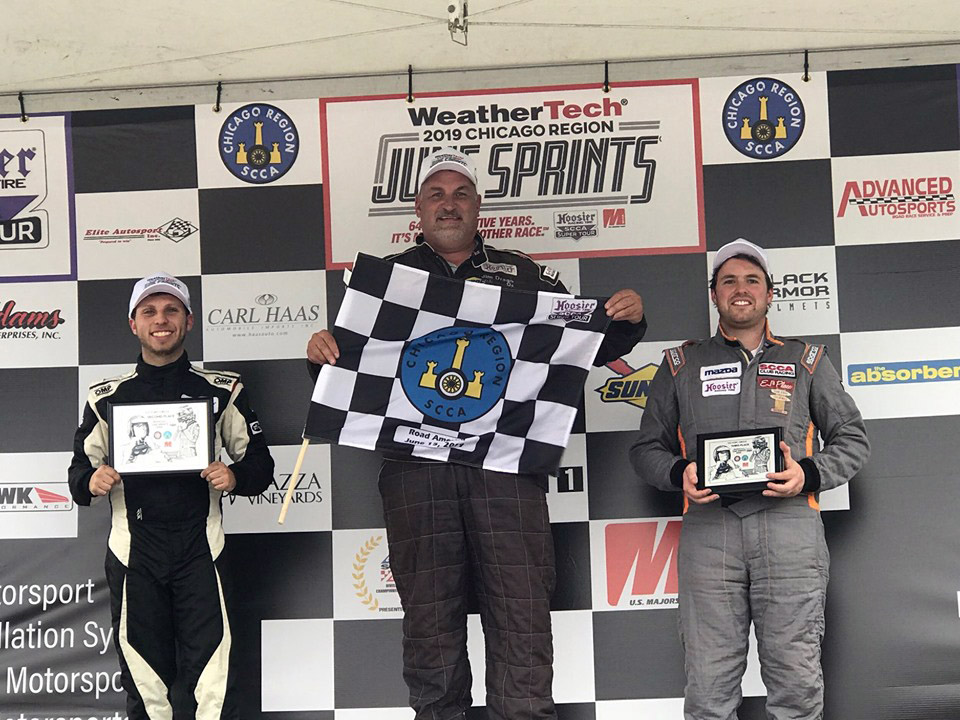 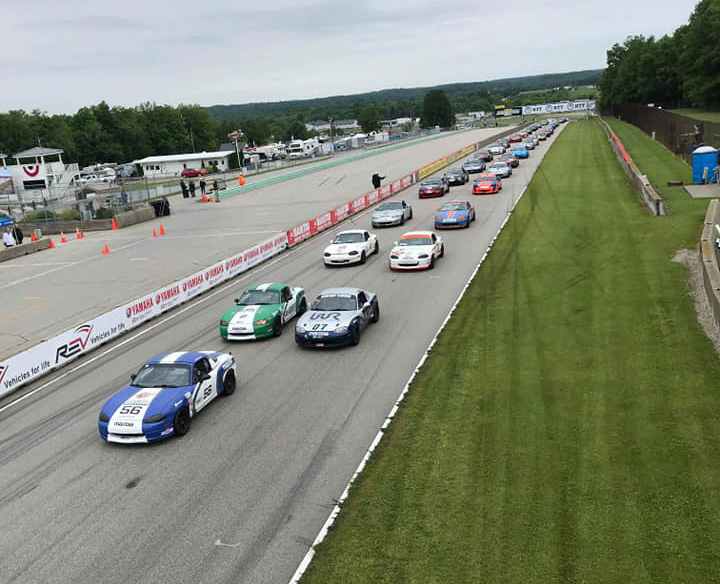 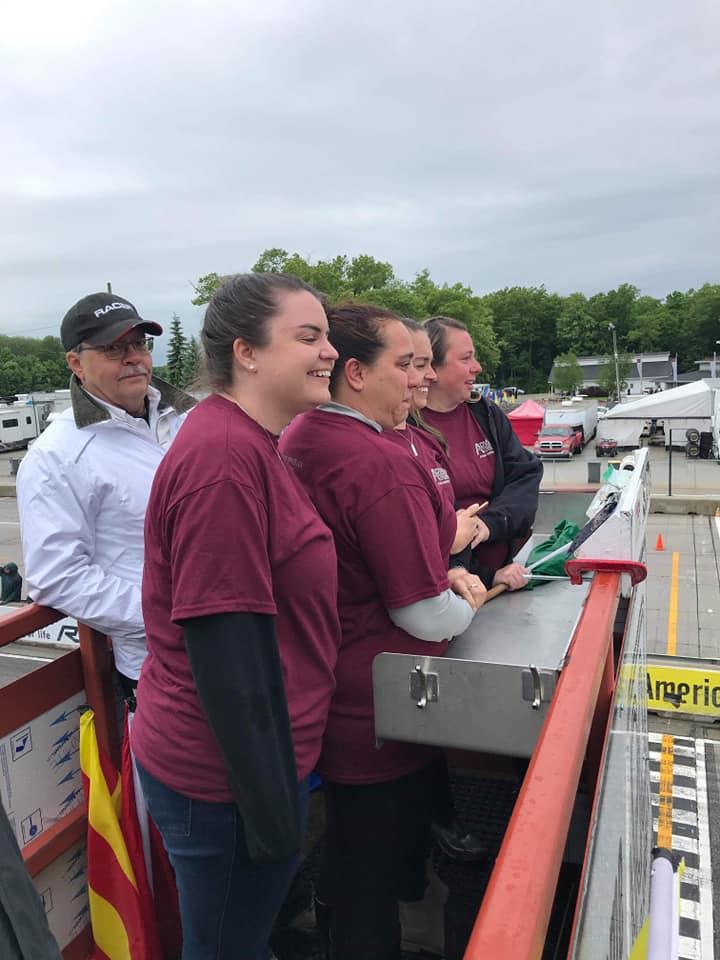 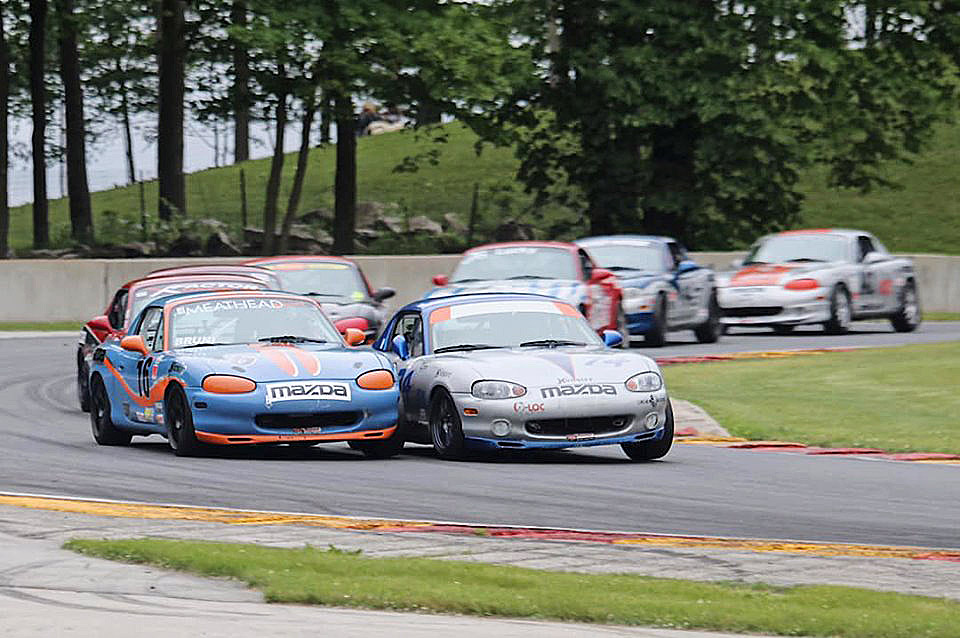 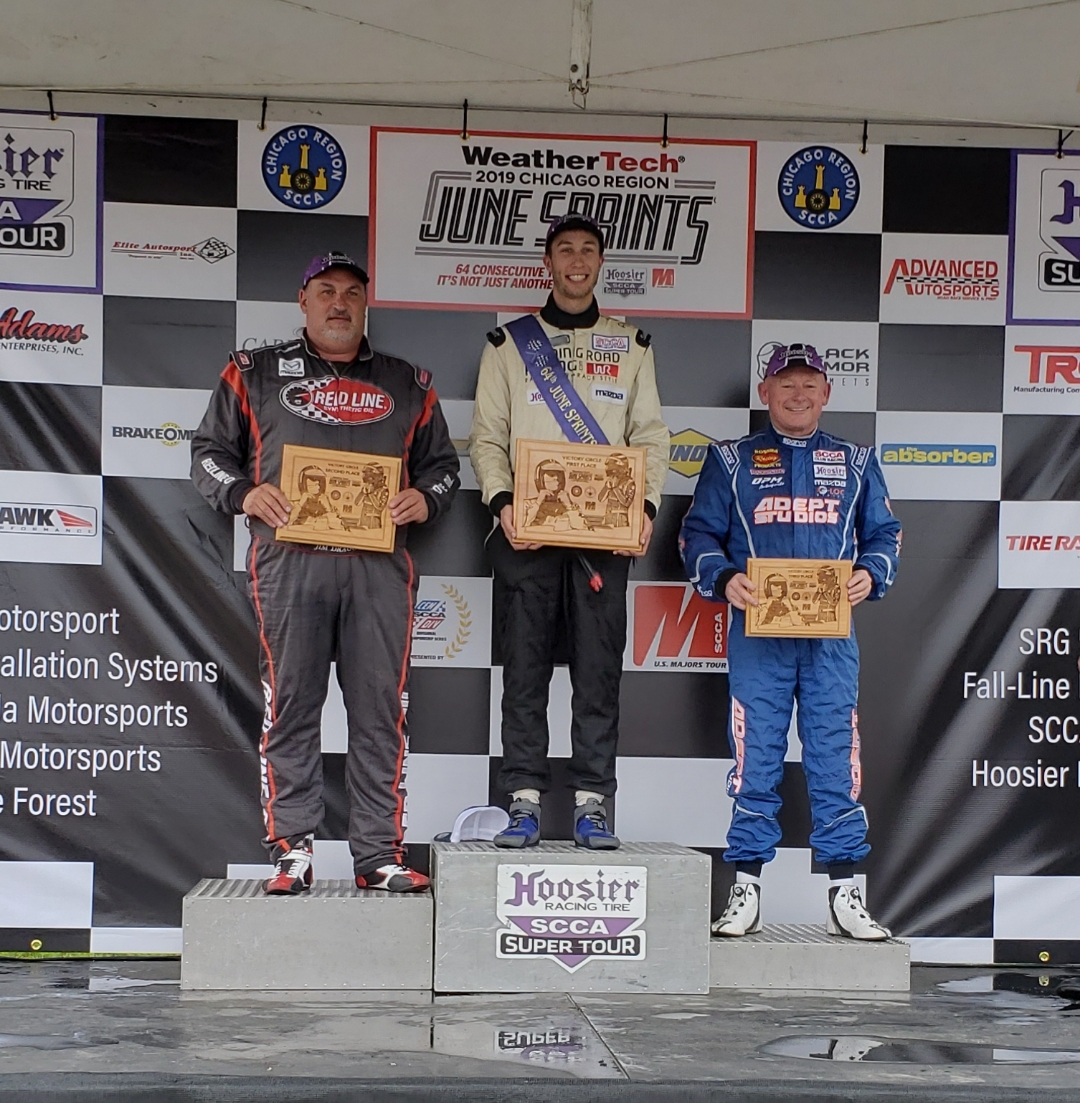 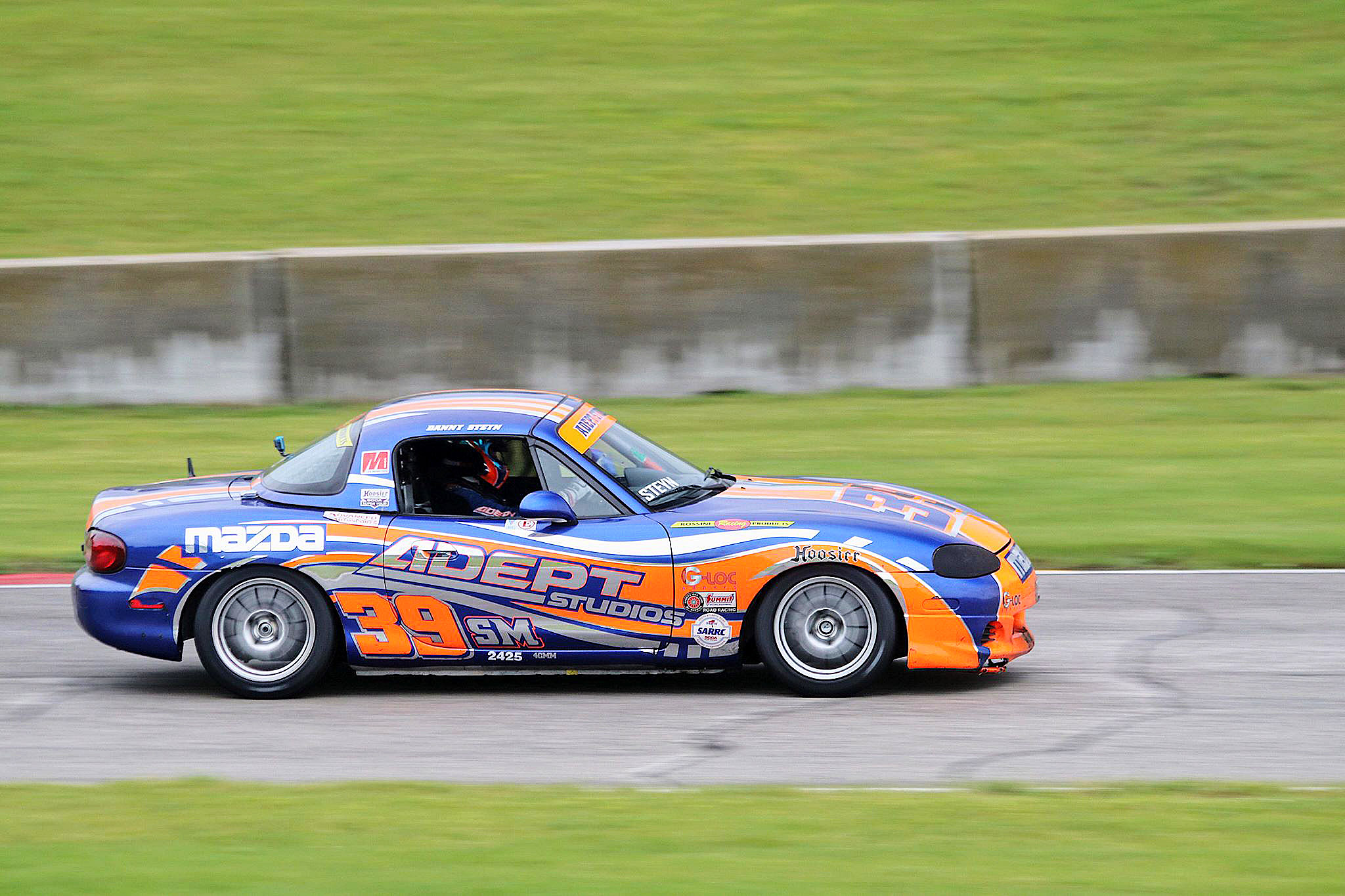 The June Sprints, behind the Runoffs, is next biggest show in the SCCA calendar and the event always attracts the best of the best to contend for the first component of the coveted Triple Crown.

This year, based on the various weather apps that everyone was studying, it appeared as if rain was going to be a major factor all weekend, just as it has affected much of the 2019 Hoosier Super Tour season. Ask any racer and they will all say, “give me Rain or Dry, but not this 50:50 deal”. There is nothing worse than having your car on jack stands with 5 minutes to the green, and you still haven’t decided whether to go for rain tires or slicks.

The first Qualifying session was a wet to drying track, and Steyn went out on rains, and immediately was well clear of the field but as the track dried, Steyn went backwards and ended up finishing the session in 11th place, with Matt Reynolds and Jim Drago on the front row with one more qually session to come.

In the 2nd Spec Miata qualifying session, Michael Gagliardo showed that sitting out an entire season didn’t hurt his pace at all and he drove his Rossini powered Spec Miata to 2nd place with Danny Steyn in 4th. Peter Ensor was on pole and Voytek Burdzy in 4th.

Race 1 was a dog fight from the start with Voytek Burdzy getting the early lead, with Drago, Buras, Pardus, Ensor, Reynolds, Brown, Gagliardo, Bender all in the mix. Steyn had missed the setup completely and was barely hanging on to a top 10 finish. First Burdzy retired with a broken diff, then the front three drivers started a train with Gagliardo and Brown on their tail and Steyn, Ensor, Reynolds and Bender hanging on. By lap 5 the top 10 were still bumper to bumper in a train.

Bender pushed Gagliardo back into contention, Buras dropped back and Brown made his way to the front taking over the lead with one lap to go. Brown was in the perfect position to pose a threat to Drago, but messed up in the kink, spinning in front of the entire field, but neither hit the wall, nor got hit.

Drago held on to the lead with Pardus, who narrowly missed Brown in the kink on his tail in 2nd. Gagliardo finished on the podium in 3rd, an amazing result for his first race of the 2019 season. Bender finished in 4th, Ensor and 5th and Steyn was lucky to hold on to 6th place.

Sunday’s feature June Sprints race was once again run in wet to drying conditions, but with no chance of additional rain, the entire field went out on dry tires. In a moving tribute to the passing of both Ann O’Malley and Dave Wheeler of Advanced Autosports, the Spec Miata field did a missing man extra pace lap and the green flag was thrown but Ann’s daughter and the Advanced Autosports ladies.

Steyn, starting back in 10th place, quickly moved forward to 5th spot in the braking zone of Turn 5, and then drove past Pardus and Drago up to 3rd place in the carousel, passed Brown in the exit of T12 and then passed by Buras into the lead through T3 at the start of lap 2.

Steyn proceeded to drive away from the field, adding to the gap every lap until the lead had built up to 6 seconds, but as the track dried, the bump drafting of the train behind started to make slight gains, first a few tenths per lap, and then almost a half second per lap.

With three laps to go it looked like Steyn could hold on for the win, but lapped traffic got in his way in several turns, allowing Drago and Brown to close right up on his bumper. And with one lap to go Brown and Drago passed Steyn, with Pardus hot on their tail. Pardus over drove Turn 5 and it was a 3-car race to the finish. Brown pulled out of the tow at the precise moment and got the side draft past Drago to win his first June Sprints title, an amazing feat and especially satisfying with the long history that the Brown family has with Advanced Autosports. Steyn hung on to finish 3rd with Pardus 4th.

Jonathan Davis, with two 9th place finishes in a deep talented field, once again proved what an underrated driver he is. One of these days he will put it all together and get his first Hoosier Super Tour win.

The next leg of the Hoosier Super tour is at Watkins Glen, June 21 – 23. See you there.