Danny Steyn and Michael Carter, along with several other Rossini drivers get a jump start on the 2020 season in Florida 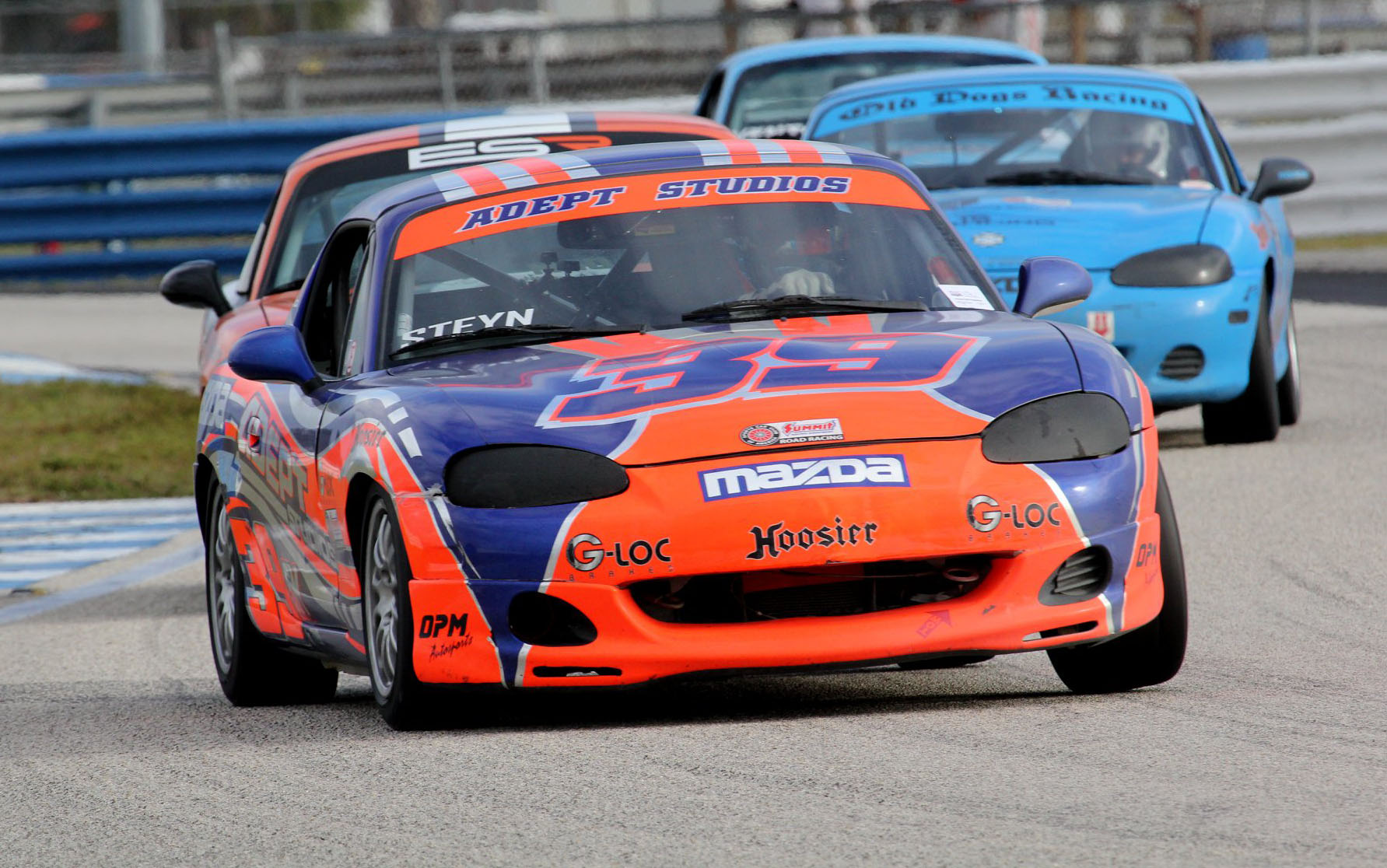 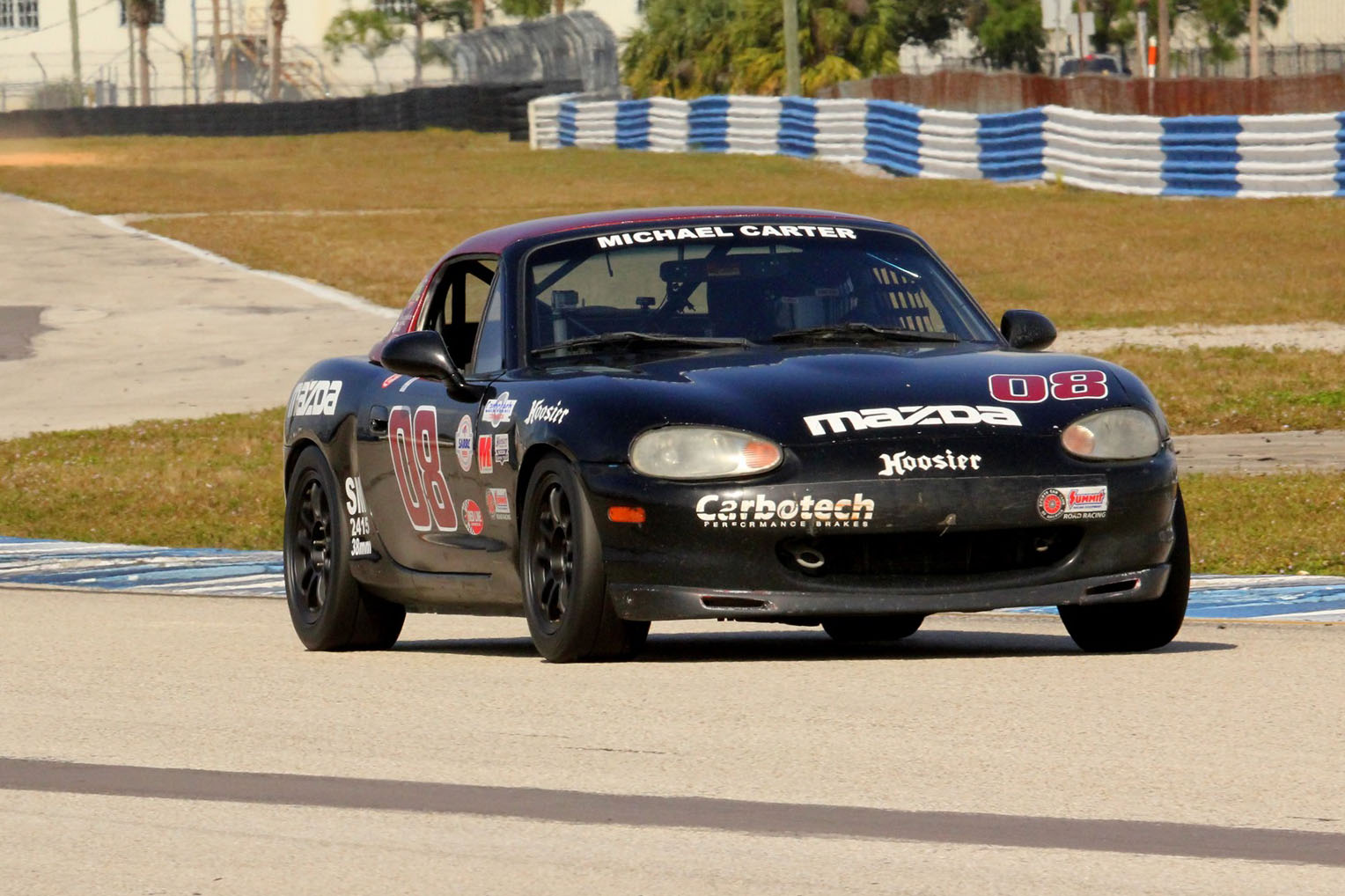 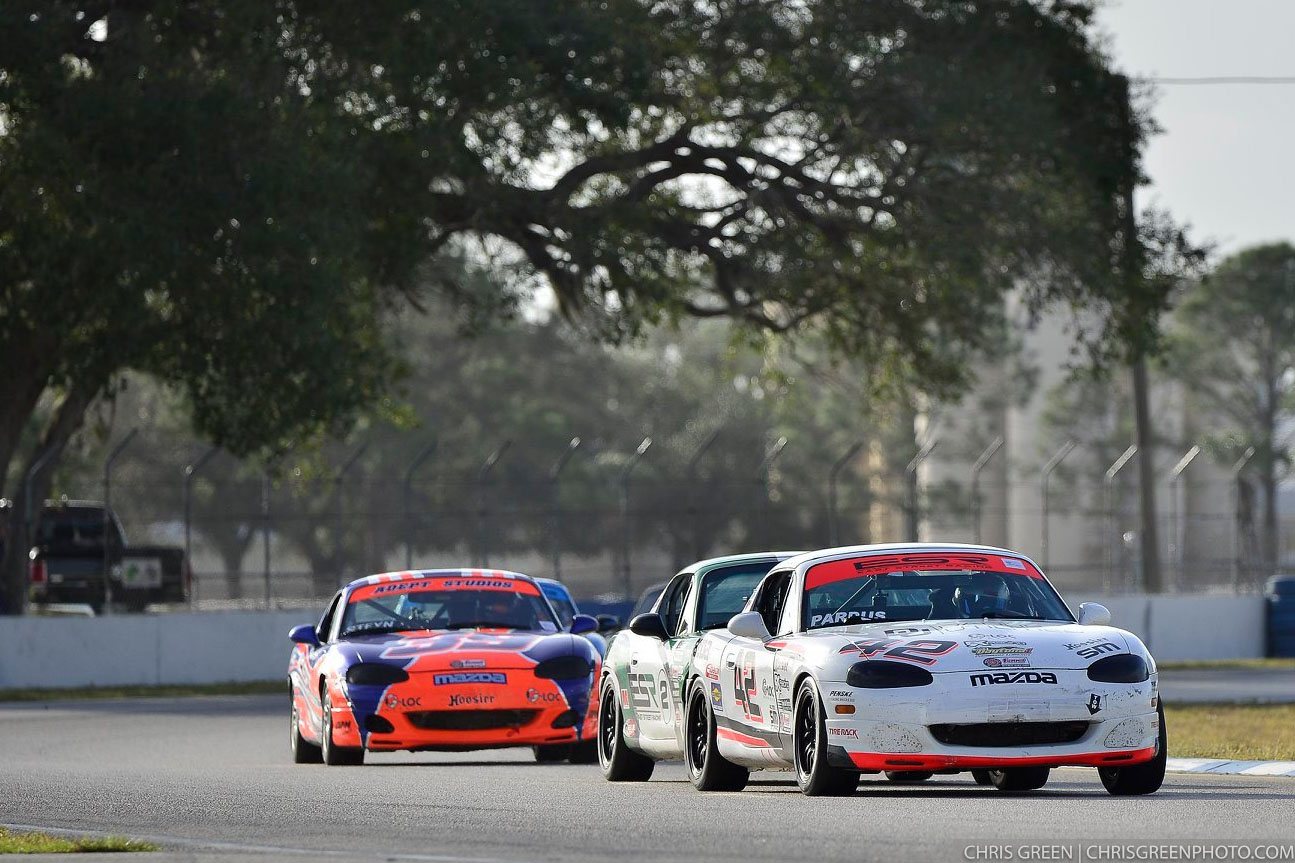 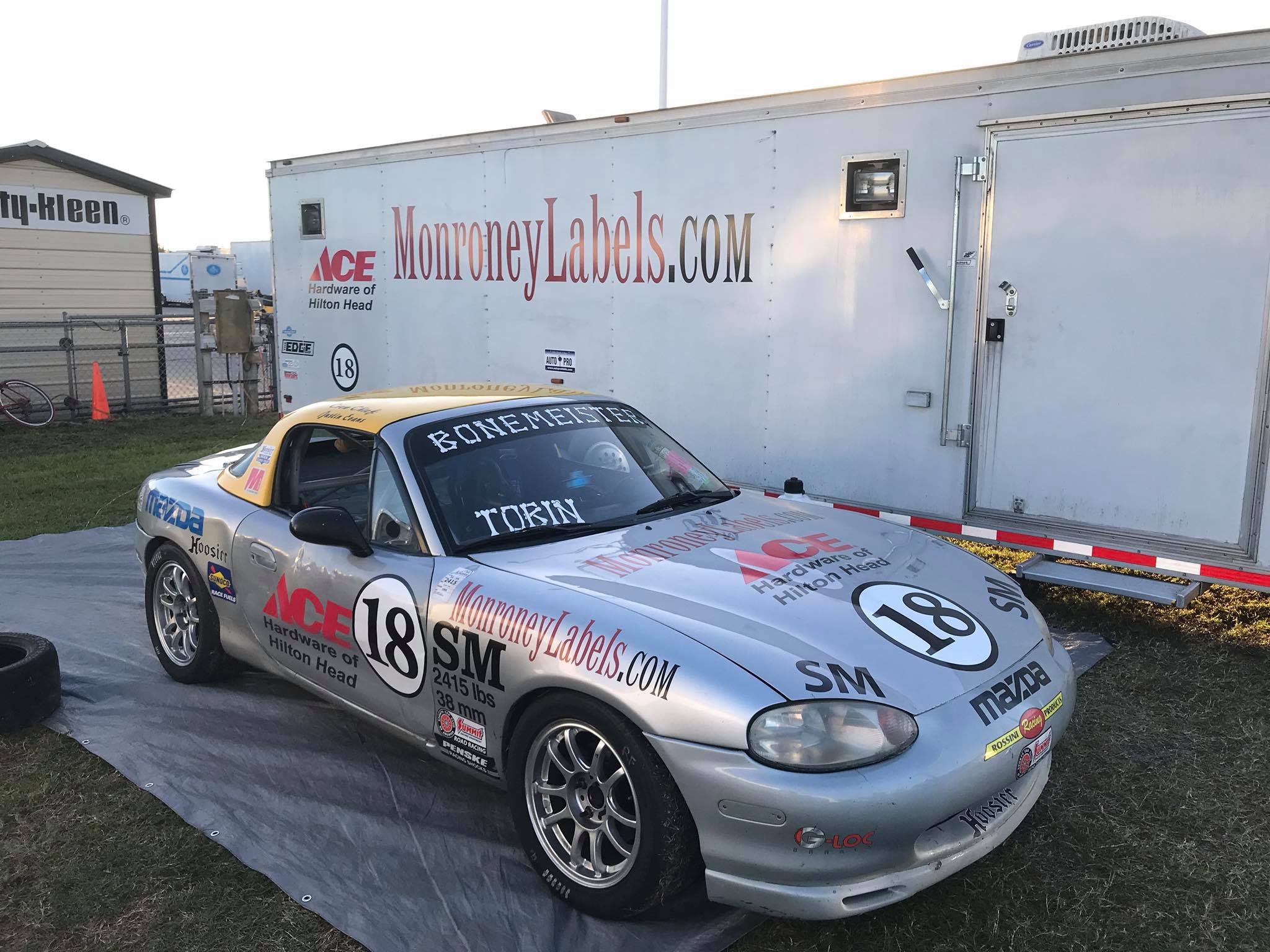 Racing starts early in the South East, and the back-to-back Florida race weekends in the first two weekends of the year bring out the best racers eager to get a start on the 2020 Championship Season.

The first weekend, the SCCA Majors Race at Miami Homestead Motor Speedway is a roval, with a short infield section, and a long, banked section, run flat-out in the draft in a Spec Miata. Horsepower is at a premium over handling, and races are won by racing as a team, drafting and bump drafting. A superb lap run on your own is typically about 0.8 seconds slower than an average lap run in a draft.

In Q2, Drago, Pardus and ESR team mate Todd Buras took the first 3 places with Czaczyk in 4th, Leverone in 5th, Goulart in 6th, Steyn in 7th, and Gonzalez in 9th.

Saturday’s Race 1 saw Pardus and Drago make an immediate break-away leaving the rest to the field to chase for 3rd. Gonzalez made some stellar moves moving up to Steyn’s bumper and then pulling away to leave Steyn a distant 4th. Rossini team mates Michael Lamaina finished 16th and Joel Schubert finished 26th

Sundays 40-minute feature Race 2 saw the two young kids make an immediate breakaway, with Gonzalez pushing Pardus away from his team mate into the lead. Behind him both Drago and Buras succumbed to car issues, and Steyn made some errors, falling into no-mans land, running solo lap after solo lap. In the end Pardus triumphed over Gonzalez by a tenth, Goulart finished 3rd, 7 seconds back, Czaczyk 4th on Goulart’s bumper and Steyn in 5th, 12 seconds off the leader.

The first round of the Hoosier Super Tour took place the following weekend at Sebring, very much a driver’s track where setup and grunt out of the turns are more important than raw horsepower, but a drafting team mate still makes a difference.

Q2 was run on a wet-to-drying track with no hope of going faster than Q1, so many drivers sat out the session, but several drivers went out to get familiar with Sebring in the those conditions, and to improve the wet weather driving skills. Steyn was top of the list, 2 seconds clear of Todd Buras.

In Saturday’s Race 1, Pardus and Drago broke away again, trailing a very determined Gonzalez. Steyn fell back to 5th behind Goulart and together with Carter started to catch back some time. Unfortunately a FCY came out and at the re-start, Steyn got around Gonzalez with the help of Carter, and got after Drago and Pardus. Steyn unfortunately got skunked several times in the corners, and this allowed Gonzalez to get by, and together they chased down Pardus and Drago, but neither were able to get around them.

Pardus held on for the win, Drago was 2nd, Gonzalez 3rd, Steyn 4th and Carter 5th. The top 5 drivers all finished within 1.4 seconds, all ran laps within 2/10ths of each other, with Steyn getting the Fastest Race Lap by 8/100ths of a second over Gonzalez. Amy Mills finished a solid 15th, Mickey Moran 22nd, and Joe Tobin 31st.

At the start of Sunday’s Race 2 Steyn hit the shift gate on the tree-four up-shift and immediately dropped to 15th in the middle of the kill zone, but escaped unscathed.

Up front there as an epic battle for the lead involving Pardus, Gonzalez and Carter. Unfortunately, while running three-wide down the chute from T1 to T3 they touched sending Carter into the wall at a high speed. Fortunately, he did not bounce back into the track and apart from some minor car damage he escaped unharmed.

Heading down to T7, Gonzalez and Pardus were side by side, but Drago made contact with Pardus knocking him off the track but he was able to rejoin in 5th, but all the incidents brought out the 2nd FCY and the race was finished under Yellow.

Thanks to Chris Green, Dave Green, Pepper Bower for the super images.