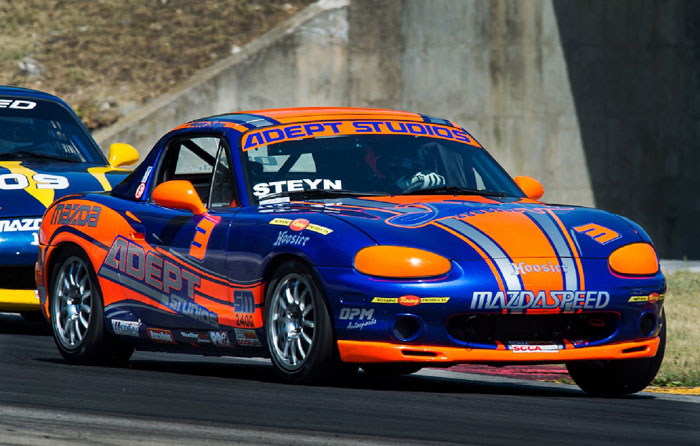 The Spec Miata race at the 2012 June Sprints, like all June Sprints before this one, was an action packed affair from the test day through the race day.

Straight off the trailer, the East Street trio of Drago, Sandlin and Berry were fast, and were setting the fast times. Steyn in his Rossini powered OPM built car was close and hanging on. By the time the Saturday 2nd qualifying session was over Steyn had been moved back to 7th place. The 1.6 of Todd Buras had moved forward as well as the 2011 of Stefan Tisseront and the Freedom Autosports 99 car of pro driver Tom Long . The top 7 cars were within 0.5 seconds of each other showing how important a drafting partner was.

At the start of the race, Steyn got held up going through the Carousel and lost touch with the front group of 5. Stefan Tisseront and Steyn started closing the gap as they worked together, until Tisseront’s car had a problem with fuel pressure. Steyn then hooked up with Carbonnel and for a moment they looked as though they might close the gap, but it was not to be.

On the last lap, Berry who was leading had to check up after an accident ahead of them in the Kink, and in the accordion affect his diff was broken and he DNF’d. Todd Buras was the winner, with Jim Drago 2nd Tom Long 3rd, Pat Sandlin 4th, Danny Steyn 5th and Andrew Carbonnel 6th.