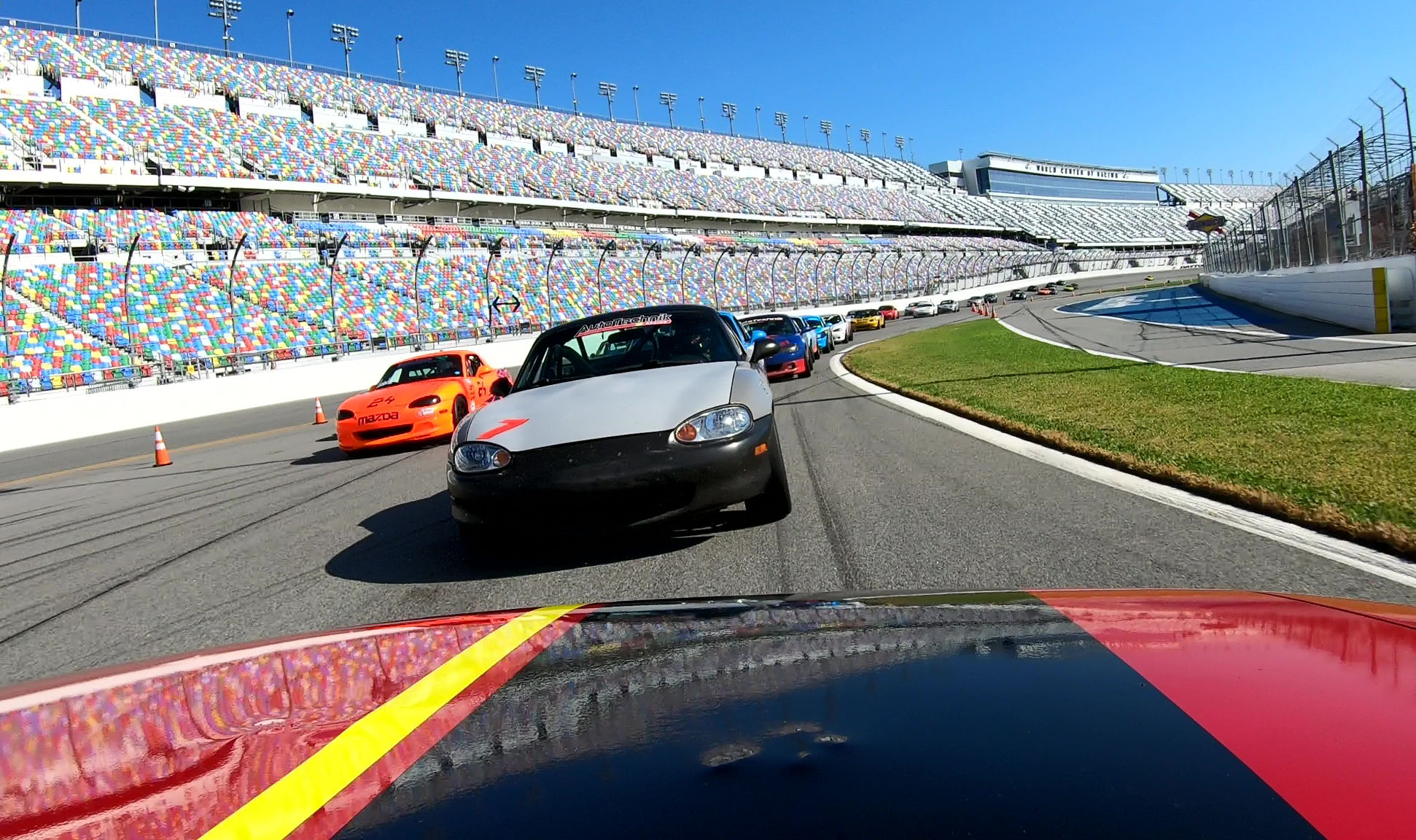 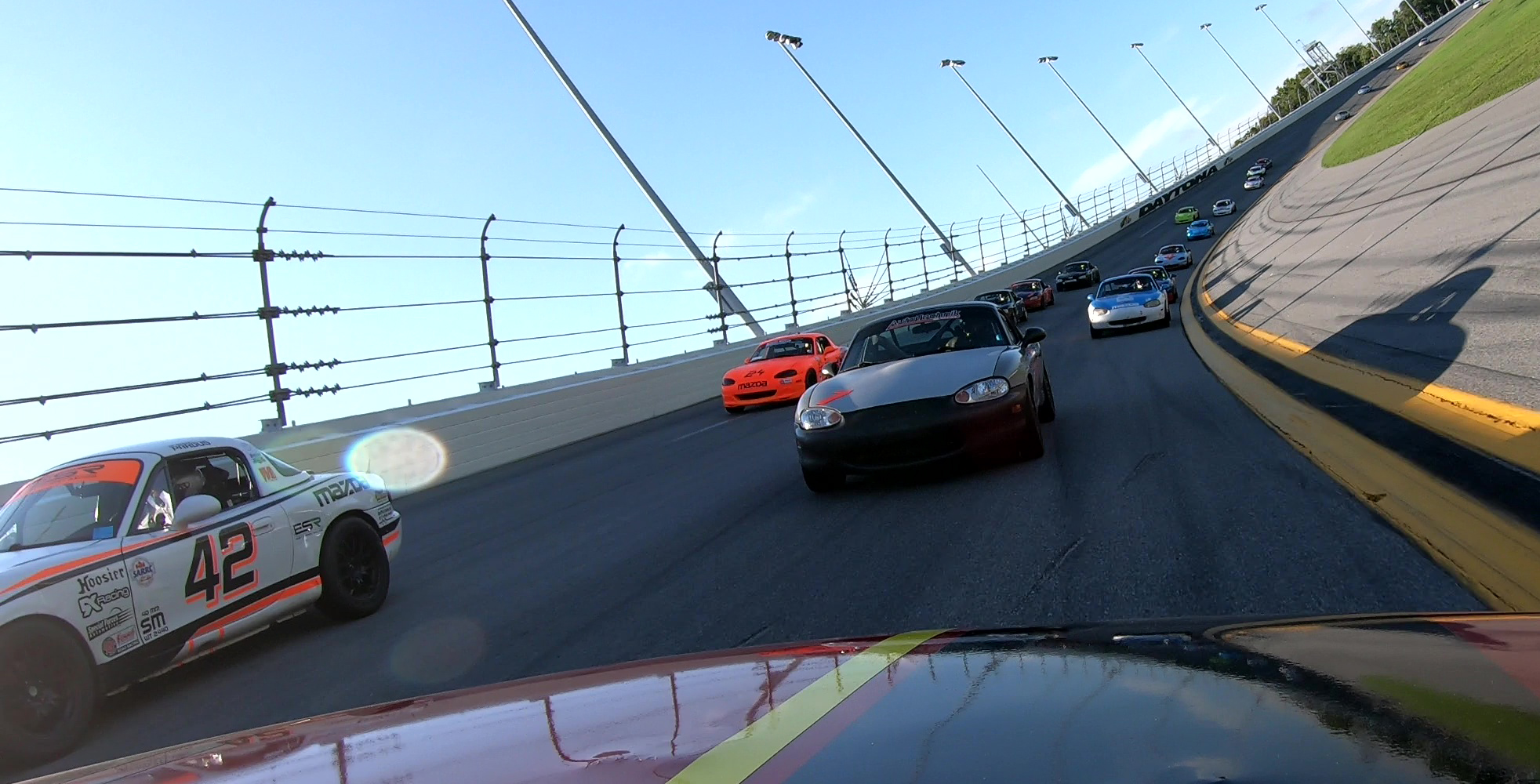 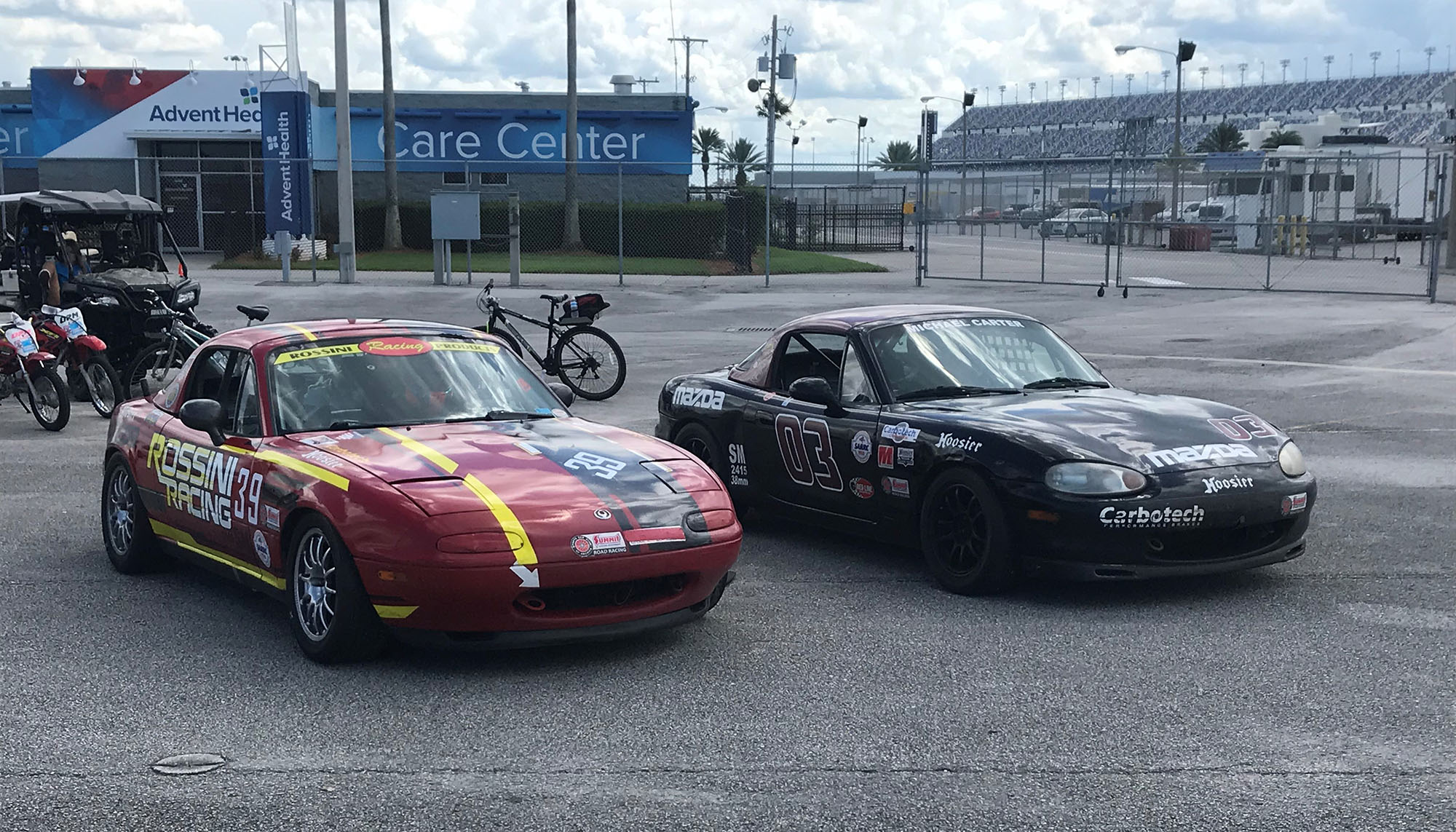 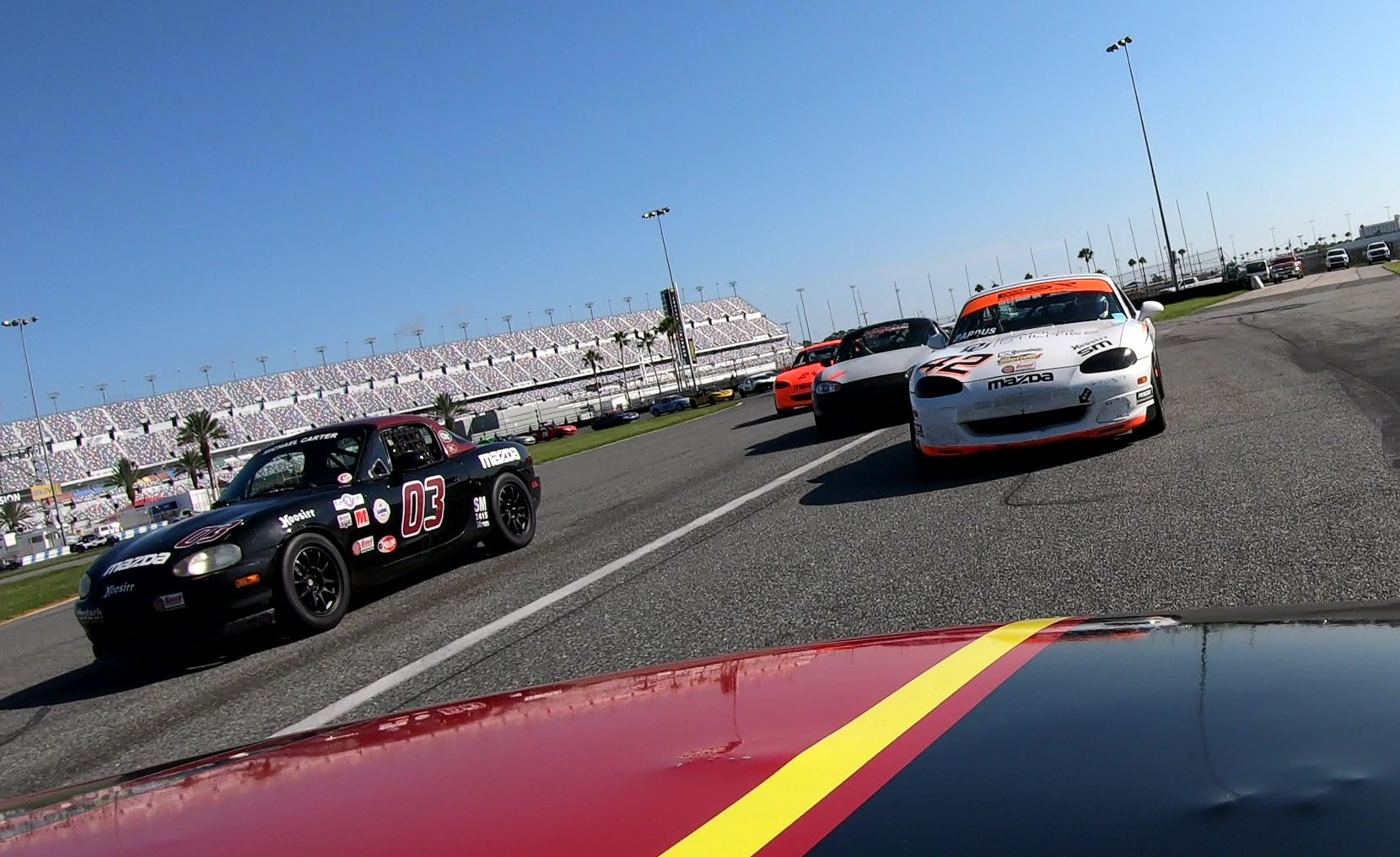 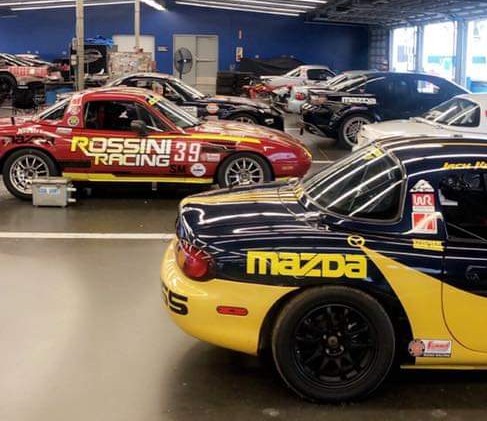 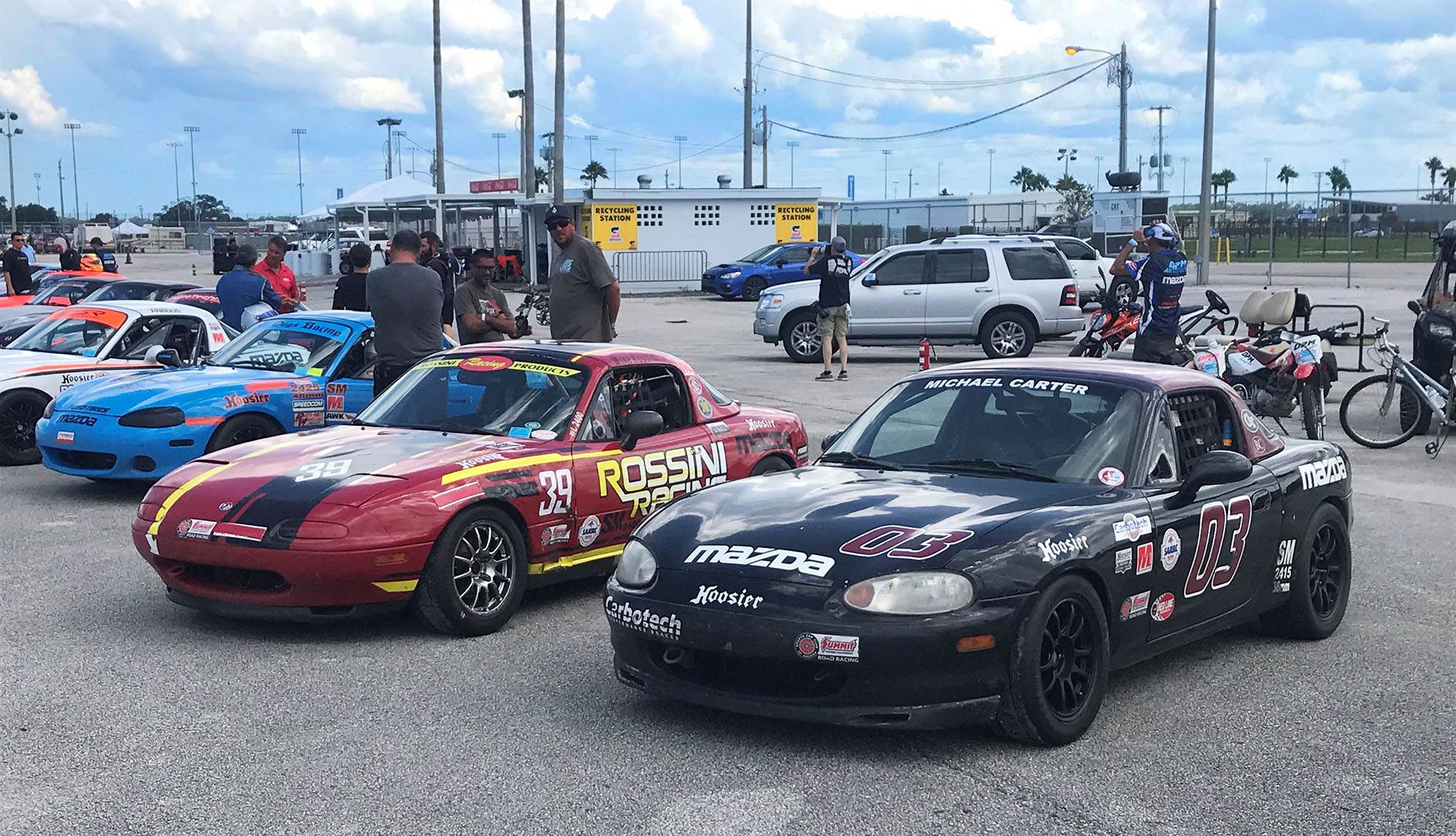 Daytona is such a special place to race Spec Miata’s, since it is all about strategy and team work. Races are one by tiny margins and 3 wide finishes in Spec Miata are pretty normal.

This past weekend saw Double SARRC races with a qualifying session and a qualifying race determining Saturday’s grid, and Sunday’s grid would be determined by the fastest times from all combined sessions.

Michael Carter, fresh off his Rookie Pro Season in the Global MX-5 Cup series, came back to slum it with the amateurs, and he and Danny Steyn teamed up to run just one great lap in the Qualifying session, putting the two Rossini powered drivers on the front row of the grid for the afternoon’s Qualifying Race.

In the qualifying Race, Steyn and Labounty got together in Turn 1, and Steyn dropped back to 35th with front end damage and significant tire rub. Up front Carter, Preston Pardus, Tyler Gonzales and John Davison were having a full-on race, with Pardus coming home first followed by Gonzalez and Davison.

Carter retired with the dreaded cam sensor miss, but Steyn was able to move up through the field and finish 8th.

Sundays Race 1 was a absolute war at the front with lots of side-by-side racing through the infield. Steyn, Carter, Pardus. Davison and Gonzalez all had turns at the front, and Cory Collum was a long way back, out of contention. But the side by side racing allowed Collum to get closer. Davison lost a gearbox and then Pardus stumbled short on gas through Turn 1, causing everyone the check up and suddenly Collum was in the mix.

Steyn led into the start of the last lap followed by Gonzalez, Collum and Carter, but Gonzalez and Carter got by Steyn going into the bus stop. Steyn had a good run through the bus stop getting onto the back of the two leading cars with Carter just a few car lengths back.

Heading to the start finish line, Collum moved to the left to draft past Gonzalez who move left to respond, Collum went left again but just bumped Gonzalez, ruining his run. Steyn used the side draft off Collum and Gonzalez, edging forward so slightly and just sneaked ahead for the win by 2/1,000ths of a second over Collum with Gonzalez in 3rd and Carter in 4th

The Grid for Race 2 was set by the fastest times from all the sessions, putting Carter on pole and Steyn outside of him creating another Rossini powered lockout of the front row!

From the start Gonzalez started pushing Carter away from the field, so Steyn and Pardus found each other and formed a team, and started to close the gap. Eventually Carter retired with a faulty water temp gauge, which at Daytona is a critical piece of information! Steyn and Pardus worked together putting on a clinic, clicking off lap after lap in the low 2:20’s and steadily pulled away from Gonzalez who was running in no mans land.

Coming into the last lap, Pardus and Steyn were trying to figure out how to beat the other guy, with no obvious choices, but a lapped car ahead started to offer a slight draft. Pardus went for the inside pass, Steyn stayed alongside, used his side draft and then pulled out to get the draft from the lapped car, and once again sneaked ahead to take the win by 16/1,000ths over Pardus and 23 seconds over Gonzalez.

Steyn has now raced the Rossini NA 1.8 car in 6 Spec Miata races, winning 5 of them, indicating that this platform can still be very competitive.